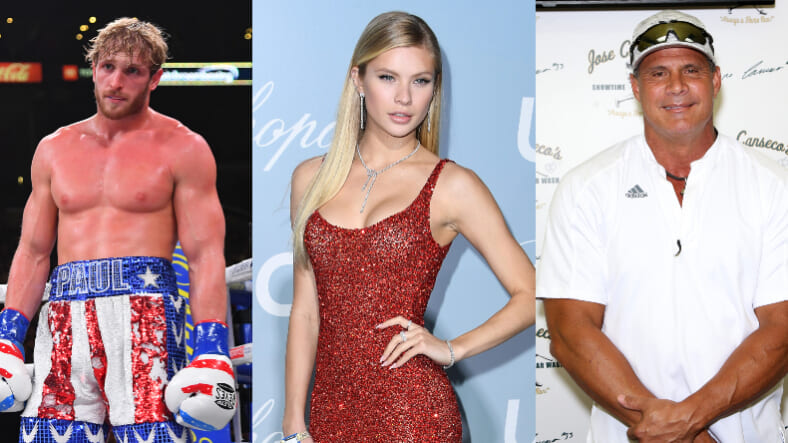 Josie Canseco isn’t in her dad’s corner. The daughter of former MLB slugger Jose Canseco revealed that she’s no longer speaking with her flamboyant 56-year-old father, who won’t stop feuding with YouTube-famous brothers Logan and Jake Paul on social media.

The generation-bridging beef began after Jake knocked out NBA player Nate Robinson on the Mike Tyson/Roy Jones Jr. undercard, at which point Jose tweeted, “I will fight anyone of the Logan Brothers they have enough for anyone with any type of talent yet or fighting skills.”

Logan Paul then ruthlessly reminded Jose of his relationship with Josie, writing, “No problem. i love smashing cansecos.”

Things have only gotten more tense in time since, and Josie isn’t having any of it.

“My dad’s been going on a f–king rampage on Twitter calling out Logan, calling out Jake [Paul], just being so selfishly embarrassing,” she said in a lengthy rant to friend and fellow model Charlotte D’Alessio on the “Between Good and Evil” podcast.

“Normally if a dad wanted to start a ‘fake Twitter beef’ or whatever, he’d be like, ‘Hey, do you mind if I call out your boyfriend and call him weak and this and that for attention?’ I have no idea [if he’s joking]. He’s blocked right now, to be completely honest. We haven’t spoken.”

The 24-year-old model went on to describe a heated confrontation with her dad.

“When it comes back to character and integrity, I don’t f–k with those selfish moves. He’s just embarrassing. ‘What are you doing, Father? Dad, help. Explain to me, please. Why are you being this way?’ I went off. I ripped him a new a–hole. He’s like, ‘I’m a grown man, you won’t tell me what I can and cannot say.’”

The New York Post reports that Josie is confounded by Jose’s attention-seeking moves, given that he’s a six-time All-Star and two-time World Series champ.

“You are low-key a legend in some ways. Why do you need to lower yourself?” Josie said of her father, who is now scheduled to fight a Barstool Sports employee at Rough N Rowdy on Feb. 5.

“Ew. I just hate it, and so I told him to stop doing it and delete it and he was like, ‘I’ll never stop.’ Fine, then I won’t speak to you as long as you’re doing this and bringing in my personal life, my relationship to your social media for attention and for money and for clout.”

“I have no respect for that, so do not speak to me as long as that’s where your perspective is at in your life.”