How the Hell Did Julian Edelman Catch This Ball?

The Patriots comeback took a lot of miracles, but none were bigger than this miraculous grab. 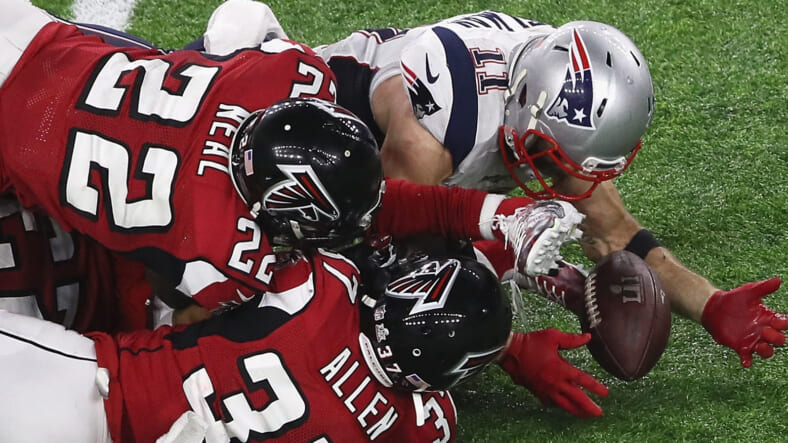 Eight minutes into the second half of Super Bowl LI, with the Falcons leading 28-3, the Patriots had a 0.2 percent chance of winning. After four titles in 14 years, the fifth seemed out of reach. If you kept watching, you know what happened next. The Pats stormed back and won in overtime, defeating the Falcons and the nearly insurmountable odds. It didn’t happen without a few miracles.

The biggest came in the fourth quarter, after New England already put up 17 unanswered points and were driving with a chance to tie the game. Standing at his own 27, Tom Brady floated a ball into double coverage to Julian Edelman. It should have been intercepted, then it should have fallen to the ground. Instead, it bounced on a Falcon defenders foot before Edelman plucked it out of the air inches from the ground. In a word, it was miraculous.

If you didn’t think Edelman hauled this in at first, you’re not alone. He wasn’t even sure. “I knew I had a good feel on it,” Edelman later said. “I didn’t know if a piece of the ball was touching. I don’t know what the dang [catch] rule is. No one knows what the rule is. I am pretty sure I caught it.”

Patriots head coach Bill Belichick felt the same. “I wasn’t sure if he had it or not,” he said.

The Falcons challenged the call on the field because they had to. But after the replay aired in the stadium and on TV, there was no question. Edelman had just made one of the greatest Super Bowl catches of all-time. Let’s take a look from a couple different angles.

The twisted irony here is that the extreme effort of the three Falcons all selling out to intercept the ball is what made Edelman’s catch possible. Without their arms and legs to bat it around, preventing it from falling incomplete, Edelman never makes the grab. (Let that be a lesson to anyone out there considering trying too hard.)

Wild as it was, this catch only picked up 23 yards for the Pats. They still needed to score, convert a two point conversation and then score again in overtime if they wanted to complete the comeback. Still, it was hard not to feel that the game was over after this play.

It took the Pats three more plays to get to the one-yard line, and James White punched the ball into the end zone on his first attempt. The following two-point conversion seemed a forgone conclusion. Then it was on to overtime and after they won the coin flip, they marched down the field with ease to win the game.

In the locker room after the game, Patriots players went nuts about the catch. According to them it was, “unbelievable,” “one of the greatest Super Bowl catches,” “totally phenomenal, “insane” and “the best catch that I’ve ever seen in person, hands down.”

Edelman himself was modest about the catch that will go on to define his career. “You know, I made a decent play,” he said with the modesty we expect from pro athletes. “Then I was on to the next play. We had a lot more to do.”

Let’s give the last word to Brady, who made this whole play possible with a poor decision and poorly thrown ball: “One of the greatest catches I’ve ever seen,” he said.