Kamaru Usman Vs. Jorge Masvidal Will Be UFC 251 Main Event

The UFC made the grudge match official with an announcement early Monday. 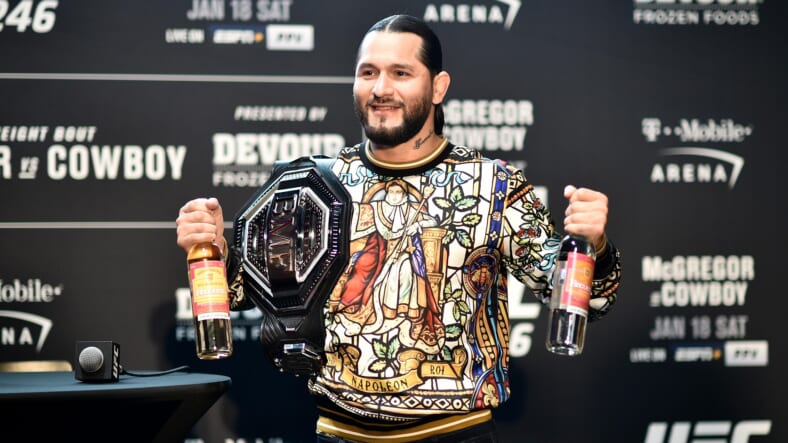 If UFC 251 wasn’t official before, it is now, and it has a headline fight: Kamaru Usman will enter the Octagon to face Jorge Masvidal for the men’s welterweight title on “Fight Island” in Abu Dhabi. The UFC made the official announcement in a tweet early Monday.

Citing sources, ESPN reports that “[Jorge] Masvidal passed his coronavirus test, and both he and Usman will be leaving Las Vegas for Abu Dhabi later Monday.”

ESPN also reports the fighters took their coronavirus tests once they arrived in Las Vegas Sunday, and they self-quarantined until they got their results.

This card comes out of an interesting series of events that made it seem like Masvidal might not fight for the promotion again. Here’s more from ESPN:

For the past two months, the UFC and Masvidal were far apart on contract talks to make this fight happen. In the end, the UFC decided to walk away from negotiations about a month ago and gave the title fight to Burns, who recently beat former champion Tyron Woodley.Afterward, Masvidal posted a series of tweets criticizing the UFC for its business practices and questioning whether the relationship would be severed for some time. But once Burns was forced off the card late Friday, momentum started to build for the original plan, which is a grudge match months in the making.

Usman and Masvidal have been embroiled in a heated feud that saw the duo get into a shouting match at Super Bowl media row earlier this year in Miami.

This will be a big fight for more reasons than just giving MMA fans something to look forward to after the coronavirus pandemic stopped virtually all sports for a while.

"Barring any last minute hiccups… people are very confident that, in exactly seven days from now, we're going to be seeing one of the most anticipated fights of 2020."@arielhelwani went on @SportsCenter to provide an update on @USMAN84kg and @GamebredFighter at #UFC251 pic.twitter.com/q1FFlXrzKU

Dana White has worked overtime to ensure he has healthy fighters at a medically safe venue, but it was obvious over the weekend that he was back in fight promotion mode, tweeting a 3-minute video in anticipation of UFC 251.

Jorge Masvidal lands on Fight Island with a winning streak behind him, his most recent victory a TKO of Nate Diaz at UFC 244. Kamaru Usman beat Colby Covington at UFC 245 in December 2019, scoring a technical knockout in round 5. UFC 251 will be available to US viewers on PPV through ESPN Plus. Livestreaming begins at 10 PM EST on July 11.