It was a very muddy Run for the Roses. 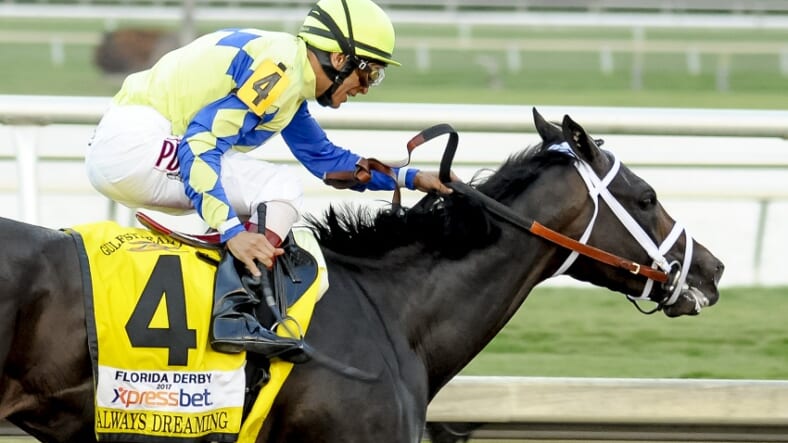 OddsShark had Florida Derby champ Always Dreaming as the betting favorite to win the 143rd Kentucky Derby, but admitted the wagers were “tepid.” Other favorites were Classic Empire—tied with Always Dreaming at post time—Irish War Cry, and McCraken. A very muddy track at Churchill Downs perhaps skewed the chances for all the horses and their jockeys.

In the end, Always Dreaming, ridden by jockey John Velasquez, was victorious in a thrilling finish.

Pretty nice view on the walk over! pic.twitter.com/z4rF7gwUuy

Patch the horse:
– has one eye
– has a Twitter account (@PatchHorse)
– got that name before he lost his eye
– is in the Kentucky Derby pic.twitter.com/jxXfdjF2h2

The Derby kicked off with a rousing launch from Jeff Bridges. It’s always been a celebrity-heavy event, but it’s hard to think of a better choice for this particular race.

Thundersnow foundered at the race start and other favorites didn’t make it to the head of the pack at all, but Always Dreaming led from the beginning and for the majority of the race.

It turned into a three-way battle at the end, but it wasn’t nose-to-nose. Always Dreaming won handily, proving the less-than-enthusiastic bettors cheering for Classic Empire, Irish War Cry, and McCraken were wrong.

Horse race fans took to Twitter to celebrate the win.

#AlwaysDreaming of a day at the #KentuckyDerby. #Kingsman’s @TheJeffBridges is ready to cheer on his favored pick at the race! pic.twitter.com/ScZ4ZYFDMW

That feeling when you pick the winning horse. #KentuckyDerby pic.twitter.com/uXu34zGvjl

Will 2017 see a Triple Crown winner? Always Dreaming has one leg down, and the Preakness and the Belmont to go before we’ll know.