Officials have requested another test before they make a decision. 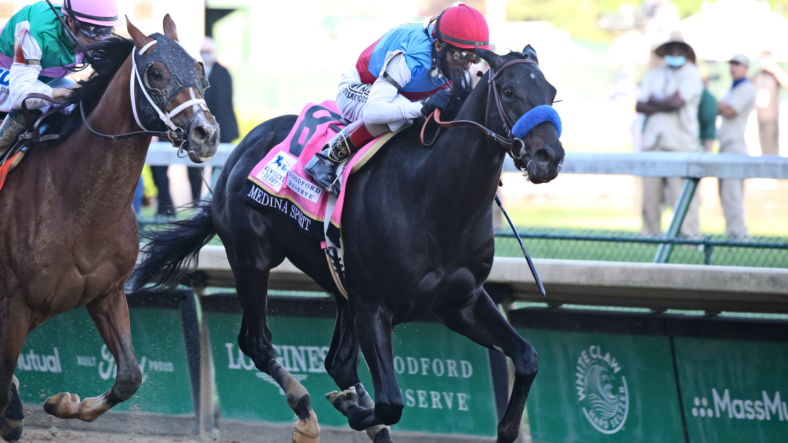 Medina Spirit won the 147th Kentucky Derby at Churchill Downs in Louisville on May 1st. Spirit had come in with so-so 12-1 odds, but still had a better chance than second-place winner Mandaloun, who was at 26-1.

Now there’s a chance that the longshot runner-up may become the longshot winner, as Medina Spirit failed a post-race drug test and may end up disqualified.

The colt’s trainer, Bob Baffert, announced the results Sunday. Baffert also called the test, which yielded 21 picograms of the corticosteroid betamethasone, “shocking,” and said the horse has “never been treated with” the substance.

Sports reporter Kat Terrell live-tweeted Baffert’s impromptu press conference and added some observations and extra information — such as the fact that Baffert’s horses appear to stumble into performance-enhancing substances on a regular basis. In addition to Gamine at the 2020 Kentucky Oaks, 2018 Triple Crown winner Justify failed a test for PEDs as did the perhaps ironically-named Charlatan prior to a race in Arkansas last year.

Baffert has had a number of high profile horses test positive in recent years, at multiple tracks, for multiple types of drugs, all with a different excuse so the “Why me,” statement rings a little hollow. Some of those include Justify, Gamine and Charlatan.

The last time a Derby winner was disqualified and the runner-up elevated was 2019, when Maximum Security was replaced by Country House. But that was for racing tactics, not substances.

For the moment, Baffert is banned from running horses at Churchill Downs.

A statement from the most famous track in all of horseracing announced the ban and ended by saying Churchill Downs “will await the conclusion of the Kentucky Horse Racing Commissions’ investigation before taking further steps.”

Baffert plans to defend himself against the allegations, so it could take quite some time before we truly know who the Commission considers the legitimate winner of this year’s Run for the Roses.