“I’ve played against some great teams, but I don’t think no team has had this type of firepower,” Lebron James said after the game. 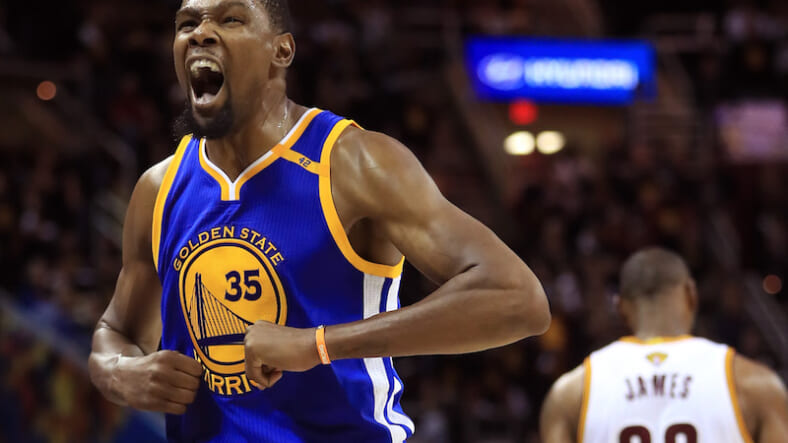 With 3:09 left on the clock in game three of the NBA Finals Wednesday night, Cavs sharpshooter JR Smith knocked down a three to put his team up 113 to 107. It was the last bucket the Cavs would score.

Over the next 189 seconds, the Warriors went on a 11 to 0 run. It began with a Steph Curry jumper at 2:18. And then Kevin Durant took over. He knocked down a mid range jumper at 1:15. And then, with 45 seconds left, the dagger was plunged into the hearts of Cavs fans everywhere.

After Kyle Korver clanked a three, Durant grabbed a rebound, dribbled up the court and, with LeBron James in his face, put a fork in the Cavs.

He would make a couple more free throws, as would Curry, but it was this three, with the Warriors down two and less than a minute on the clock, that will be remembered from this game. And it may be the moment that cemented Durant’s legacy as an NBA great.

Coming into these Finals, he was the one superstar on the floor without a championship ring—a prerequisite for greatness in the mind of many NBA fans. His widely criticized decision to join the Warriors last season made him a target of ridicule and his only chance of absolving himself of that would require a monster series.

“It’s probably the most, most firepower I’ve played in my career. I played against some great teams, but I don’t think no team has had this type of firepower,” James said after the game.

That’s what the Warriors were going for when the signed Durant to a team that already had three All-Stars under 30. And for three games, it’s been too much for the Cavs.

When it was Durant, it was Curry.

And when it wasn’t Curry, it was Klay Thompson.

Yes, the Cavs came back from being down 3-1 in last year’s finals. But that was against a team that did not have Durant. This is not that team.

The Cavs only hope at this point is that they’re able to stop the Warriors from putting up a perfect 16-0 record in the playoffs. Good luck.