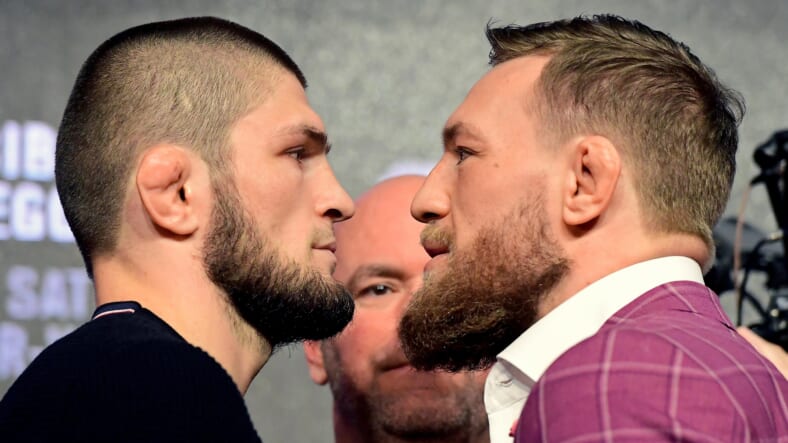 McGregor announced on Twitter last week that he was quitting MMA, but Nurmagomedov, who decisively beat the Irish superstar for the UFC lightweight title in October, says he doesn’t believe it.

Nurmagomedov said Tuesday that McGregor “couldn’t reach a deal with the UFC, and it’s so they feel they’ve lost him and they could lose money,” reports ESPN.

“I don’t think he’s finished,” Nurmagomedov added, during the Russian champion’s comments at a Moscow university.

McGregor previously retired in April 2016 but reversed the decision two days later and returned to the UFC.

The 30-year-old Irishman hasn’t won a fight since beating Eddie Alvarez in November 2016 to become the first UFC fighter to hold championship belts in two divisions at once.

“No,” White said Sunday in an interview with KLAS-TV, when asked if he believed that McGregor was really retired.

“Listen, who gets respected more than Conor McGregor does? Come on,” White said. “The guy’s never been disrespected, definitely not by me. And he’s got a lot of money too.

“But he’s stuck on this thing where he wants a piece of the ownership and that’s just — if you look at basketball, Michael Jordan didn’t own a piece of the league, and the list goes on and on.

“Is Conor very valuable to the sport and to the brand, the UFC? Of course he is. That’s a tough one, but I think there’s other ways that we can make him happy.”

Nurmagomedov also said that he would like to fight again in September, two months after the end of his Nevada State Athletic Commission ban for the wild brawl with McGregor’s team after their October fight. McGregor’s sanction ends on Saturday.

However, Nurmagomedov said he didn’t want to fight before longer sanctions on two other Russian fighters also end.

Abubakar Nurmagomedov and Zubaira Tukhugov were each banned for one year by the Nevada State Athletic Commission for their part in the brawl. Those sanctions run until Oct. 6.

“They were banned because of me,” Nurmagomedov said.

I’ve decided to challenge Hollywood actress Mark Walhberg next.
A fight for all the shares!

Meanwhile, McGregor has been busy making even more headlines with his tweets, cheekily calling out Mark Wahlberg to fight for the actor’s UFC shares.

Last Saturday night, McGregor tweeted, “I’ve decided to challenge Hollywood actress Mark Walhberg next. A fight for all the shares!”

When one of his followers made a reference to Wahlberg’s movie Four Brothers, McGregor responded, “I’ll smack him and his 4 brothers around. It wouldn’t be the first crew of brothers i’ve smacked around. Check the history books. The UFC history books.”

I’ll smack him and his 4 brothers around.
It wouldn’t be the first crew of brothers i’ve smacked around.
Check the history books.
The UFC history books. https://t.co/CEWc1JmL1y

Then McGregor responded to a tweet posted by Khabib which read, “Great feeling, after 5 championships rounds. See you soon my fans, very soon. And thank you all you guys, for support all these years.”

McGregor fired back: “You got your money took and your brothers eye socket shook when you fought me you little rat. Viva Las Vegas baby the gaf always wins.”

@TheNotoriousMMA money comes and goes, the honor that you lost that evening will never return, live with it.
Finish career in mma, but start career on twitter? #twitterWarrior

“@TheNotoriousMMA money comes and goes, the honor that you lost that evening will never return, live with it,” wrote Nurmagomedov. “Finish career in mma, but start career on twitter? #twitterWarrior.”

But then again, maybe this is all just more hype for the big rematch that Dana White is hoping for.