“This is not my best side; I am a human being.” 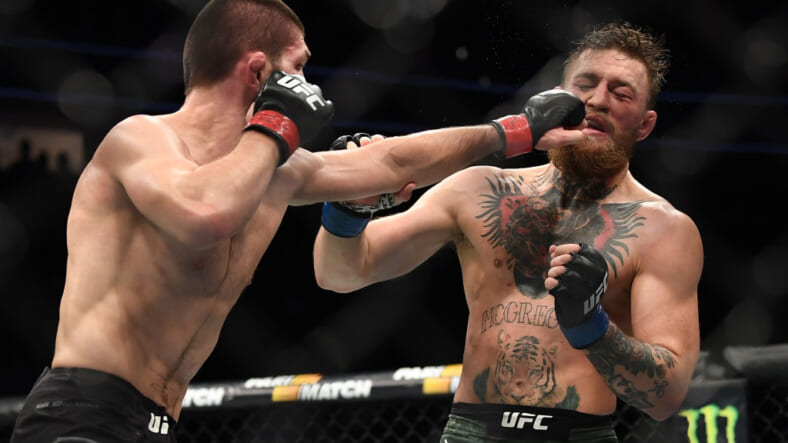 Khabib makes Conor tap out and then chaos ensues

– Khabib talks some extra trash to Conor
– Khabib jumps the cage
– Conor appears to get punched by a member of Khabib's team pic.twitter.com/w2eg4Yz3tc

In the run-up to UFC 229, Conor McGregor seemed even more motor-mouthed than usual with his verbal attacks on UFC lightweight champ Khabib Nurmagomedov. He’s got a gift for colorful insults anyway, but he’d really taken it up a notch.

McGregor’s taunts and insults didn’t make any difference to his opponent—the Notorious One lost in a submission. Unfortunately for winner Nurmagomedov, what happened after his victory may end with losing his belt—and his visa.

In three rounds Nurmagomedov virtually humiliated the one-time unbeatable MMA superstar, and the match ended in the fourth with a McGregor tap out. Well, the match ended. The fighting did not.

The moment he released McGregor from the hold that ended it all, Nurmagomedov had a new target in mind. It’s self-evident in the video above.

Dillon Danis, another rival and a McGregor ally, heckled and insulted Nurmagomedov the entire night, so the ferocious Dagestani vaulted over the cage and came gunning for Danis.

The shocking attack galvanized the crowd, and everybody was kung fu fighting. Okay, maybe not actual kung fu. Either way, it was a little bit frightening.

Huge brawl broke out between Khabib and Conor fans in the hall after UFC 229!! The Irish and Russians mix like oil and water 😂😂😂 #McGregor #Khabib pic.twitter.com/hDOuAYzmpd

The fight didn’t leave the ring, either. Almost simultaneously, members of Nurmagomedov’s team went after the exhausted McGregor. The worst attack came from an MMA fighter in street clothes, who repeatedly pounded McGregor in the head.

Las Vegas Police and T-Mobile Arena security intervened and eventually both fighters were escorted from the venue surrounded by guards protecting them from angry fans of both sides.

If this had been a normal night there would’ve been commentary from both fighters to report and some kind of ceremony in the Octagon. Obviously, this was not a normal night.

It’s not surprising that emotions went into overdrive once McGregor was taken down. Both fighters really hate each other. That hate was first stoked in April, with the McGregor crew’s now-infamous attack on a bus carrying Nurmagomedov’s crew at Barclays Center—the one where McGregor threw a dolly at the bus and a number of fighters were hurt by flying glass.

McGregor was ordered to take anger management classes by the court after he was arrested. It seems Nurmagomedov needed some as well, as he indicated before the match that he was genuinely angry with his opponent—likely for the Barclays Center attacks as well as McGregor’s colorful and downright nasty tirades against him and his family.

Nurmagomedov did seem contrite afterwards and offered a general apology, saying, “This is not my best side, I am a human being.”

He offered this explanation of his rage against McGregor: “He talked about my religion, country, father. Why are people talking about me jumping over a cage?”

Dana White clearly took the event very seriously. He withheld the winner’s belt and both fighters were sent to the showers. In an interview with ESPN he said the Nevada State Athletic Commission hasn’t paid Nurmagomedov yet, either.

UFC 229, after a night of great fights, not a great way to end it. A step back for the promotion… #UFC #UFC229 #MMA #McGregor #KhabibMcGregor #Nurmagomedov pic.twitter.com/q7oInj3uxG

It was a solid match, exciting in its own right. Nurmagomedov’s cool, calculating style was on full display as he made McGregor play his game. The Irishman is a great striker and Nurmagomedov a great wrestler. But McGregor couldn’t avoid grappling, in the end, and he was too worn down by round 4 to continue.

The night did have its highlights, however. Prior to the main event, Joe Rogan was interviewing heavyweight Derrick Lewis following Lewis’ victory over Alexander Volkov. Lewis removed his pants and Rogan asked why.

The end of the night was fucked up, but I choose to think about this moment when I remember this event. That, and all the other great fights. Even the main event was awesome up until the disaster after the tap. Either way, @thebeastufc had the best post fight interview ever, and he’s got the best Instagram page out of any fighter in the sport.

“My balls is hot,” said Lewis. Dude is nothing if not practical.

There were plenty of side stories to go around, like the presence of McGregor supporter Drake, who provided comedy relief.

The singer was ringside, and his expression on seeing Nurmagomedov leave the ring was about as meme-ready as possible.

Drake shat himself when Khabib jumped the octagon 😭 #UFC229 pic.twitter.com/geujilfLlV

Drake was acting like a hard man Trying to go after Khabib men This was pure comedy loooooooool pic.twitter.com/dFC63RI2aI

Dumb memes aside, the riot may severely damage Khabib Nurmagomedov’s career. Speaking after the match, UFC president Dana White said, “We have to see what happens with the Nevada State Athletic Commission.”

“There’s going to be fines,” he continued, “There’s going to be God knows what. Can these guys get visas and get back into the country? I mean Khabib. We’ll see how this thing plays out. I’ve been doing this for 18 years and the biggest night ever and I couldn’t be more disappointed.”