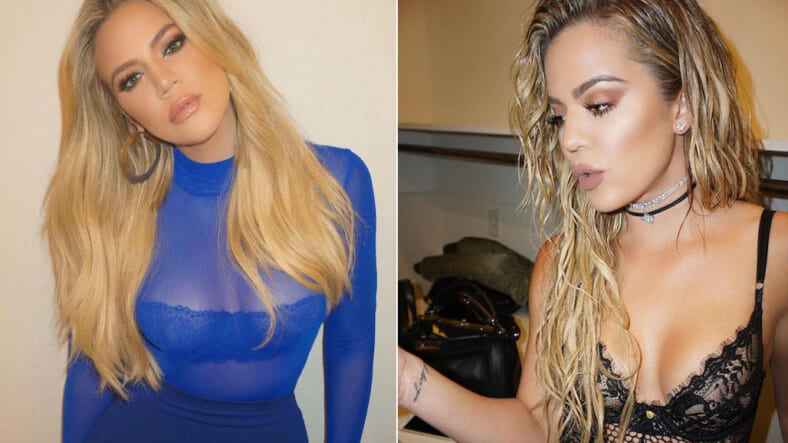 Khloe Kardashian is sick and tired of NBA fans blaming her for the struggles of boyfriend Tristan Thompson, who’s not even struggling. The Cavs power forward is putting up the same numbers he always has and his team is winning, like it always has. Still, that hasn’t stopped haters from assuming that Khloe’s mere presence must be hurting the Cavs. And so they tweet dumb stuff at her.

Last night, some tool told Khloe that the “Cavs haven’t been playing too well” since she and Thompson became an item. Her response was perfect, and more than a little crude.

They are #1 in their conference but thanks 4 sucking my dick hard enough 2 think I have that much power. Lick on my balls while you're at it https://t.co/dIJFhw6j3g

She’s right, of course. The Cavs are in first place at 11-4 and they’re 6-4 over their last 10 games. Twitter doofus @Slimmy97 must not have looked up the stats before firing off this tweet. He did see Khloe’s reply though. We know this because he’s now been forced into Twitter hiding, deleting the original tweet and locking his account. He’ll think twice next time before coming after Khloe.

I'm looking for beautiful, powerful women to star with me in a campaign for my new denim brand! Details at theGAproject.com

#ad So in love with my @foxylocks Clip in Hair Extensions! The quality of the hair is amazing and so thick! I'm wearing the New Seamless range in Superior 22″ in Sandy Blonde! use code FoxyKhloe for a free gift! Shout out to my girls @imogenfoxylocks & @larafoxylocks #foxylocks

Interview day for #KUWTK!!! I Still can't believe we are in season 12!! Im obsessed with my half up half down bun by @justinemarjan and my gorgeous makeup by @1maryphillips 💋

Talking about our problems in excess is one of our biggest downfalls. Choose to manifest our blessings! Focus on the joy in life. We rise by uplifting others!!! Today I pray you choose abundance, love and happiness over everything!! Today WE rise!! Kisses!! PS I love this sweet baby doll look 💋