The Laker legend’s sex scandal is coming back to haunt him. 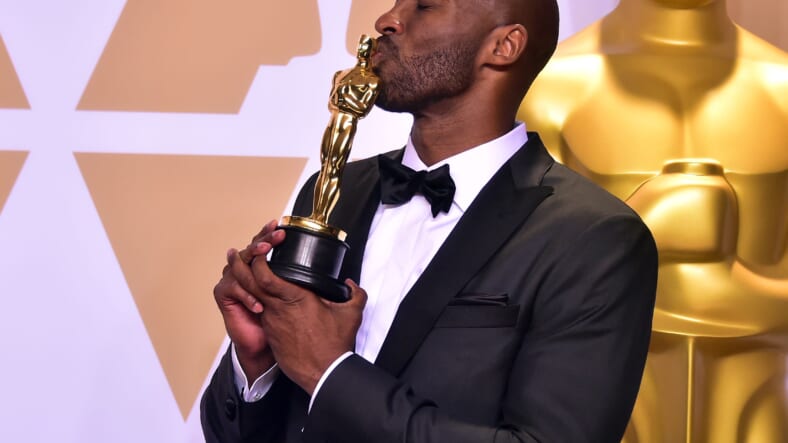 Sunday night’s Academy Awards were the first since the launch of the #MeToo movement, Time’s Up and broader societal awareness of the sexual abuse and harassment faced by women in Hollywood and other workplaces across the country.

It was also the first Academy Awards to give an Oscar to Kobe Bryant, the Laker legend who was accused of rape by a 19-year-old hotel employee in 2003. Though he insisted the encounter was consensual, Bryant later made a pretty clear admission when the charges against him were dropped.

“Although I truly believe this encounter between us was consensual, I recognize now that she did not and does not view this incident the same way I did,” he said. “After months of reviewing discovery, listening to her attorney, and even her testimony in person, I now understand how she feels that she did not consent to this encounter.”

The irony of Bryant’s win at an event that that shined a light on many prominent accusers of disgraced produced Harvey Weinstein was not lost on viewers.

Define irony? Kobe Bryant wins an Oscar during the year of the #MeToo movement. #Oscars

Kobe Bryant may or may or not have raped someone and definitely cheated on his wife. But he plays basketball so…. #oscars90

Bryant, who was cheered as if he’d just hit a game winner at Staples, won his Oscar for Dear Basketball, an animated short he wrote and produced about the end of his NBA career. Wisely, he stayed away from talk of sexual misconduct in his acceptance speech, but he did touch on another recent controversy.

“As basketball players, we’re really just supposed to shut up and dribble,” he said, a swipe at a recent comment made by Fox News host Laura Ingarahm and directed at LeBron James.

Though Bryant’s win was seen by some as an affront to the women such Ashley Judd and Salma Hayek, who were celebrated by the Academy for the stands they’ve taken against their abusers, the NBA fraternity is strong. So while Bryant’s critics sniped, some of his most famous friends celebrated without reservation.

Congrats to KOBE first Oscar that’s big bro #dearbasketball. Proud of you, Big honor for you and your family. I’m jealous lol