He’s not so sure about dinosaurs, either. 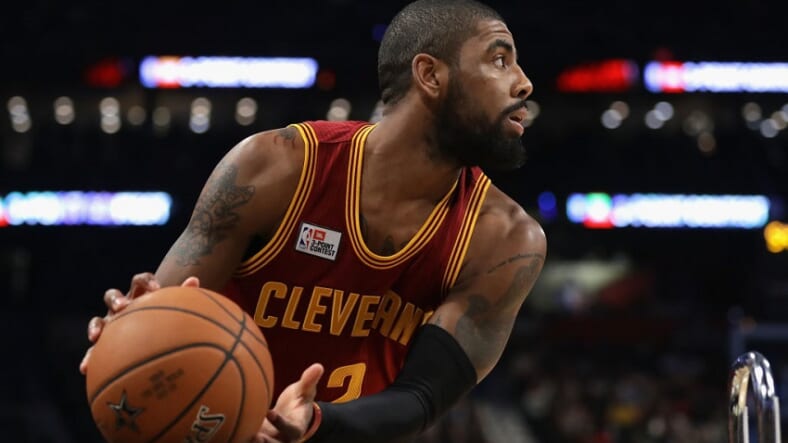 You don’t have to be an expert in natural history to be an NBA All-Star. Still, many NBA players presumably had decent college educations and are often sharp guys, because basketball is a fast-moving game calling for great reflexes and clever strategy on the fly.

We’re sure this is true of Cleveland Cavaliers point guard Kyrie Irving. Even though we now know that he believes the Earth is flat, and also recently told an ESPN correspondent that he has questions about dinosaurs.

Kyrie Irving not only believes the Earth is flat but that the jury is still out on what dinosaurs actually looked like. pic.twitter.com/0lkra9gPE3

ESPN reports Irving first went into his thoughts on the shape of the planet in a podcast:

Irving made headlines after discussing conspiracy theories on the Road Trippin’ with RJ & Channing podcast with teammates Richard Jefferson and Channing Frye.“This is not even a conspiracy theory,” Irving told Jefferson and Frye while recording the podcast on an airplane. “The Earth is flat. The Earth is flat. … It’s right in front of our faces. I’m telling you, it’s right in front of our faces. They lie to us.”

In case—even after getting his thoughts on dinosaurs in the clip above—you still think Irving is playing around, well, he’s not.

He continued, “I think about it from just a, not even a scientific way, but the way I travel and how I get around and also the tons and tons of research that supports that theory.”

Asked by reporters for his opinion on Irving’s views, teammate LeBron James reportedly said Irving “is my little brother. If he decides the earth is flat, that’s ok.”

If you think about it, that’s just teamwork. King James is a man noted for his business acumen in addition to being a great athlete so it’s doubtful he agrees with Irving, but he recognizes that on the court it doesn’t matter who believes what as long as everyone can play well together.

Someone, please, though—ask Irving about chemtrails and UFOs as soon as possible. If nothing else the guy has proven he’s capable of giving interesting answers.