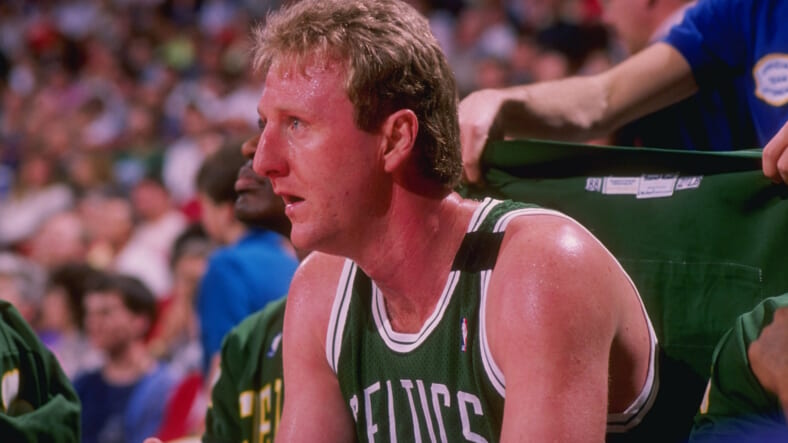 In Larry Bird’s heyday, he was known to fans as a relentless competitor with an amazing jump shot and, by the time he retired, three NBA championship rings. But in the decades since Larry Legend hung up his sneakers, a new reputation has taken hold.  The Hick from French Lick was a savage shit talker.

Over the years, Bird’s targets have come forward to share their stories. From future Hall of Famers, to complete nobodies, Bird never hesitated to let opponents know how great he was and how awful they were. On the occasion of his 63rd birthday today, we revisit our favorite Larry Legend trash talking stories.

The time Bird welcomed Dominique Wilkins to the league.

“One of the first times I ever played against him, I went out for the opening tip and I went to shake his hand. He just stood there and looked at me stone-faced with his hands behind his back,” Wilkins said recently. “I was like, ‘Whoa.’ Then we were getting ready for the tip and he says to me, ‘You don’t belong in this league, Homes.’ I couldn’t believe it, but it happened so fast, I didn’t know what to think.” — Dominique Wilkins

“Larry walks in and says, ‘I hope all you guys in here are thinking about second place, because I’m winning this.’…And he started shooting and he just didn’t miss.” — Former Laker Michael Cooper

“Rook, I am the best fucking shooter in the league. In the league, understand? And you’re up here trying to fucking tell me something?” — Larry Bird

The time Dennis Rodman tried to guard him

“Who’s guarding me, Chuck? Is anyone guarding me? You better get someone on me or I’m gonna go for 60,” Bird told then-Pistons coach Chuck Daly. Each time down the floor Bird would then yell to his teammates to pass him the ball “before they notice nobody is guarding me.”

The time he was dick even to his teammates

“Larry said, ‘You guys want to win the game? Give me the ball and get out of the way.'” — Former Celtic teammate ML Carr

The time he put Clyde Drexler in his place

“I was guarding him my rookie year, he looked at me and he goes “you can’t stop me”…I looked at him and said “gosh, boy you’re so confident”. He goes “Confident? You’re a rookie, you don’t know anything!” — Clyde Drexler

“I’m going to get it [the ball] right here and I am going to shoot it right in your face.” — Larry Bird

“You know, they go back and say Bird was a trash talker. I never thought it was trash talking. He was whispering needles. We were playing at Worchester. I don’t even know who was guarding him. Larry supposedly poked him before they started and said, “Hey, what’s the scoring record in this building?” The guy asks why. And he says, “Well you’re guarding me aren’t you?” — Former coach Bill Fitch

The time he insulted an entire race

“As far as playing, I didn’t care who guarded me. Red, yellow, black. I just didn’t want a white guy guarding me. Because it’s disrespect to my game.” — Larry Bird