Did LeBron James Just Push Out Another Coach? Mia Khalifa Sure Thinks So

Everybody’s got a take on Tyronn Lue’s mysterious leave of absence. 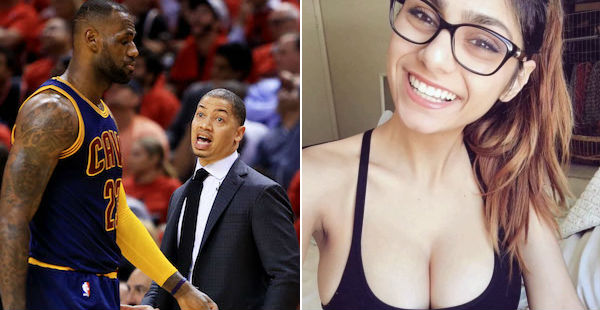 After leaving mid-game during Saturday’s win against the Bulls, Lue said he’s decided “to step back from coaching for the time being and focus on trying to establish a stronger and healthier foundation from which to coach for the rest of the season.”

Lue explained his symptoms in a statement:

“I have had chest pains and other troubling symptoms, compounded by a loss of sleep, throughout the year. Despite a battery of tests, there have been no conclusions as to what the exact issue is.”

Here’s one guess at what the issue is: LeBron James.

The Cavs superstar is no stranger to pushing out coaches and he and Lue have had several public spats this season, the most recent coming last Thursday.

Or maybe those health concerns are legit, and LeBron is the one causing them?

Y'all know LeBron is the source of Ty Lue's health issues

That might sound a little harsh, but LeBron’s been on Lue’s case for ages. And his comments Monday reveal someone who isn’t exactly destroyed over the prospect of losing his coach. Though he said Lue’s absences is like losing one of the team’s best players, he also said this:

“It’s probably well overdue, understanding what he’s been going through throughout this season. Obviously health is the most important with everything in life. I’m not surprised by it at all.”

Sounds like someone who’s eager to move on to coach LeBron.