LeBron James Has Some Encouraging Words for Ronda Rousey

LBJ knows what it’s like to have the entire world rooting against you. 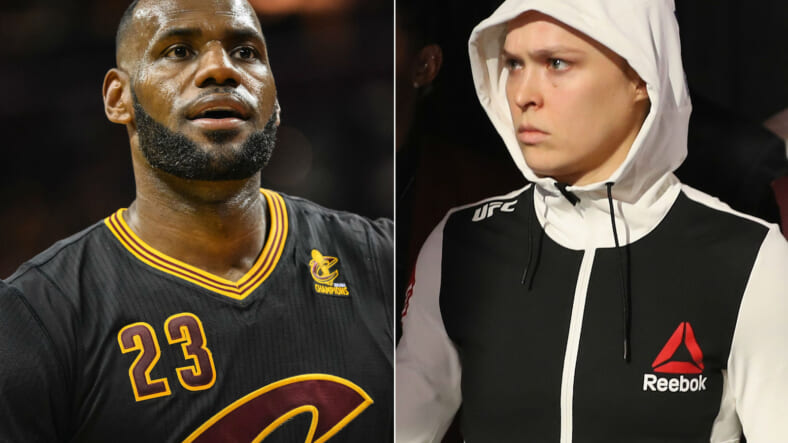 When LeBron James looks at Ronda Rousey he doesn’t see a washed-up fighter who was never as good as she believed herself to be. Nor does he see a unfairly reviled heroine, under appreciated by those who would have never succeeded without her trailblazing.

Instead, he sees a bit of himself. The Cleveland Cavs superstar spoke to his hometown newspaper after Rousey’s UFC 207 lose to Amanda Nunes and said he knows what she must feel like.

“In sports, in general, they build you up as high as they can, put you on the highest mountain in the world, just to tear you down. That’s coming from somebody who has experienced it. And that’s exactly what she’s going through right now,” James told the Akron Beacon Journal. “That’s a fact. I know exactly how she feels because I was that athlete. I went through that.”

He’s referring to “The Decision,” of course. That was the ESPN special on which James announced his now-infamous intention to “take my talents to South Beach.” LeBron became a bona fide NBA villain after that, despised for his ego and for choosing a loaded team over the difficult task of building his own empire.

All that animosity is gone now though. LeBron redeemed by apologizing for his transgressions and, most importantly, proving his greatness. He thinks Rousey may one day do the same.