“Shady” has been accused of assault, child and animal abuse, and taking PEDs after a horrifying photo emerged on Instagram. 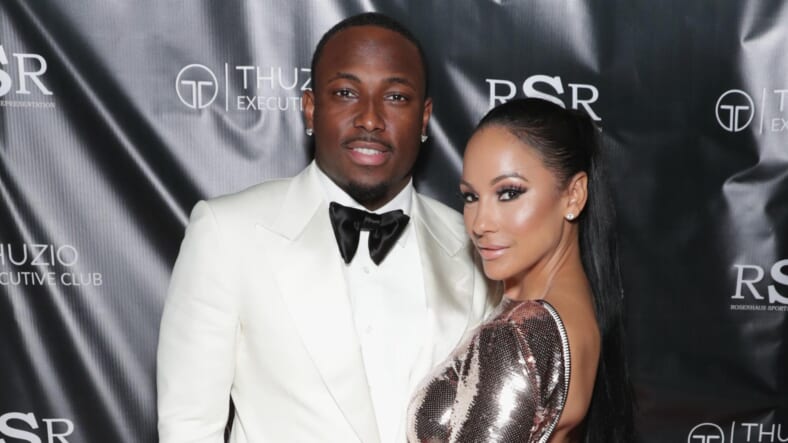 LeSean McCoy, the running back for the Buffalo Bills, says he had nothing to do with the violent beating his ex-girlfriend suffered earlier this week.

The allegations first appeared in a now-deleted post on Instagram that showed a picture of a bloodied and swollen Delicia Cordon, who McCory once dated. In the caption, a friend of Cordon’s wrote that her injuries were his fault. McCoy was also accused of animal abuse, child abuse and taking steroids.

The 29-year-old has denied all of the allegations. In a post on Instagram, he called the claims “totally baseless.”

Georgia police say they’re investigation a home invasion at home owned by McCoy. They did not identify the victim, but they described an “adult female” who was “physically assaulted by a lone intruder.” The attack does not to appear to have been random, they said.

In a statement, Cordon’s lawyer added some more details. She said that her client was attacked by a man who demanded jewelry that McCoy had given Cordon and “requested back on many occasions.” The statement describes how she suffered the injuries shown above:

In the attack this morning, Ms. Cordon’s wrist was bruised when the assailant could not get the bracelets off her wrist, and he hit Ms. Cordon in the face with a firearm multiple times while demanding specific items of jewelry and cash from her.

Ms. Cordon sustained multiple injuries to her head, face and arms during this horrendous attack. Additionally, Ms. Cordon’s female cousin was at the residence, and she too was hit in the back of her head by the assailant with the firearm.

McCoy and Cordon has reportedly be estranged since last year. He has recently been trying to have her evicted from the home.

The Buffalo Bills have responded with a brief statement saying they’re looking into the details of the incident.

A statement from the Buffalo Bills: pic.twitter.com/wfnAgBO94Q

McCoy has dealt with off-the-field trouble before. In 2016, he and a group of friends were accused of attacking two off-duty police officers at a bar in Philadelphia. He was also sued in 2013 by a woman who said he assaulted her before throwing her off of a party bus.