The Lingerie Football League Proclaims ‘We Stand’ For the National Anthem

These beauties claim they won’t #TakeAKnee. 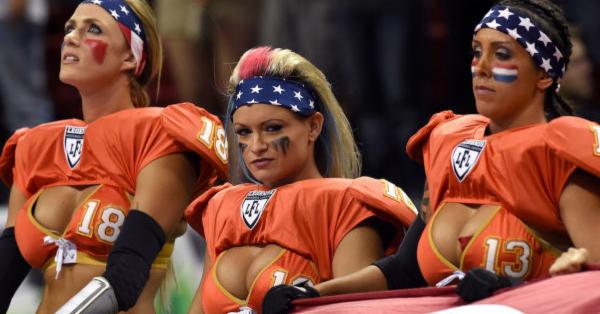 As angry NFL fans swear off the league because it allows players to freely express themselves, another football league is stepping up to assure the country that it will not stand for players who kneel during the national anthem.

The Legends Football League, formerly known as the Lingerie Football League, just put out a video declaring that its players “stand in salute of our flag.” Is it a publicity stunt? Yes. Is it an attempt to steal a few angry fans from Roger Goodell and company? Oh yeah. And is it disingenuous bullshit? You bet your ass it is.

We know this becuase it was only a few months ago that an LFL player did in fact kneel for the anthem.

Danielle Harvey was later given the chance to explain why she took a knee. She did it “to take a stand,” she said. “This song does not represent me. It was written when I was not even considered to be a human being.”

She went on, saying that her protest is also an acknowledgment of “all the injustices that are going on with the black and brown community.”

What’s interesting to note here is the response from the broadcasters, who report that Harvey’s kneeling was controversial in her locker room. But, they add, “That is her first amendment right and we here in the LFL will always recognize your rights.”

Sure, it’s a total contradiction from the league’s new video, which suggests that the LFL won’t allow players to kneel. But contradicting itself in a shameless attempt to get some media attention is the LFL’s first amendment right, and we here at Maxim will always recognize its rights.