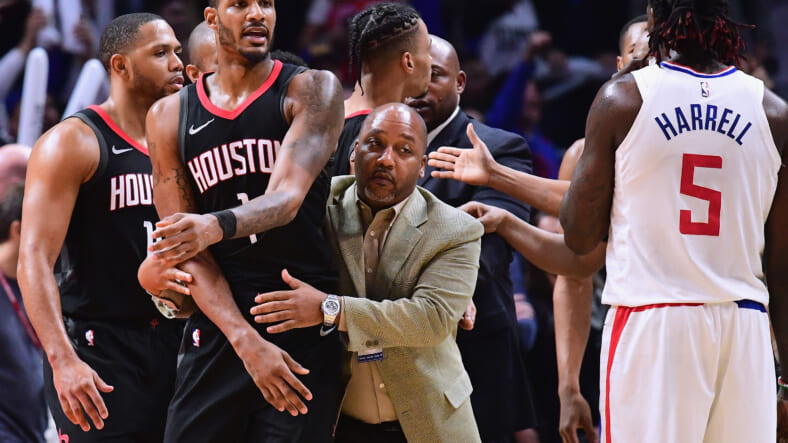 A tense, tech-filled game between the Rockets and Clippers Monday night nearly devolved into a full-on brawl when police stepped in to separate players, according to multiple reports.

The locker room confrontation involved Rockets players Trevor Ariza, James Harden, Gerald Green and Chris Paul, the former Clippers star who apparently led his teammates through a secret passageway to his old locker room. ESPN has the details on what happened next:

Stunned Clippers players, celebrating a 113-102 victory, leaped to their feet upon the realization that four seething Rockets players had come calling for them, sources told ESPN.For a few fleeting moments, several Clippers dared the Rockets to come farther into the room, sources said. Security and team officials soon converged on the Rockets, pushing them out the door and back toward the visiting locker room, sources said. Ariza was described as the first one through the door, with Paul lingering in the back, witnesses told ESPN.

The Rockets players were reportedly after two Clippers in particular. Austin Rivers, who was out Monday with an injury, was “especially belligerent from the bench in the late stages of the Clippers’ victory,” ESPN reports.

The other target was Blake Griffin, who torched the Rockets with 29 points and 10 rebounds in the Clippers 113-102 victory. As the game wore on, Griffin mixed it up with several Rockets players and head coach Mike D’Antoni.

First, there was the ball he nearly threw off of Eric Gordon’s head.

Later he got into it with Paul, his former teammate, and D’Antoni, who later said Griffin ran into him on the sideline. For you lip readers out there, notice what D’Antoni says at 0:56. Sure looks like “Fuck you.”

A few minutes later, Griffin stepped in as Ariza and Rivers started barking at each other, leading to his ejection.

The fireworks then moved to the locker room, but this being the NBA, there was no actual fighting, just a lot of preening and chest bumping.

Once the players were separated, they resorted to talking shit to the media. Here’s Paul calling Clippers guard Lou Williams the team’s go-to-guy. For the obtuse, that’s a dig at Griffin.

Others simply tweeted their shit talking.

And millions of NBA fans across the country made like Chuck and Shaq and laughed their asses off. The NBA is a sloppy soap opera and it’s glorious.