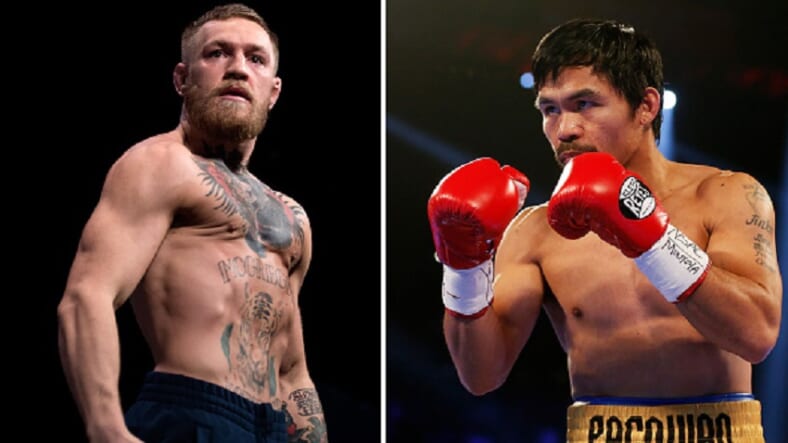 Manny Pacquiao has been making noises for quite a while about fighting Conor McGregor. Now it sounds like he may get his wish.

The AFP reports Pacquiao is angling to set up a match with McGregor when he’s not busy as a legislator in the Philippines:

“If we can negotiate it, I have no problem. It is OK with both of us,” Pacquiao said when asked about reports he was seeking a match with McGregor who lost a megabucks boxing match in August against the unbeaten Floyd Mayweather.Asked if he had already approached McGregor’s handlers for such a fight, Pacquiao told AFP, “initially, but we have not yet had any follow-up conversations.”

It’s easy to be skeptical, but it was a little hard to believe McGregor, an MMA superstar, would step into the ring with Floyd Mayweather—then he did in August, and fought a solid if unremarkable and ultimately losing match.

Pacquiao also indicated he’d learned of McGregor’s willingness to face him in the ring following the Mayweather match. That may be the root of his tweaking McGregor on social media, as he did in late November with Thanksgiving greetings.

One thing that’s certain should the UFC champ and the legendary boxer do battle in April is the sport—Pacquiao will only box. As he’s said before, “[If] we are talking about Conor McGregor and boxing, it’s different. Boxing is different than MMA.”

In spite of McGregor’s loss to Mayweather, there still seems to be a debate about whether boxing is superior MMA.

It could be the Notorious One learned just enough about top-level boxing last August that he’s ready to once again try and prove MMA athletes are superior fighters.