Marc Gasol is the latest to ape the UFC champ’s ultra-cocky victory strut. 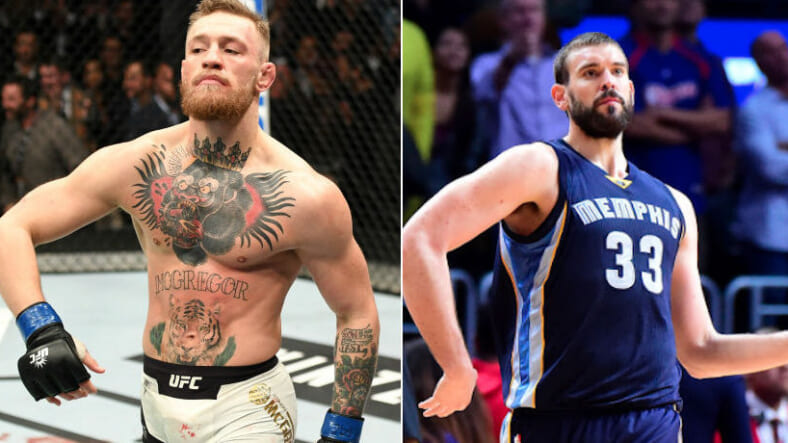 Want a sign that Conor McGregor is one of the biggest stars in sports? Look at what Grizzlies center Marc Gasol did after knocking down a three last night.

You may recognize that move as the “billionaire strut”—aka the “swag walk” or the “power walk”—brought into the public consciousness by Vince McMahon and further popularized by McGregor.

And you may recognize that quote in Gasol’s tweet from the epic troll job of a speech that McGregor delivered after brutally knocking out Eddie Alvarez at UFC 205 last weekend.

In America, the NBA is one of the big boys and the UFC is still a plucky underdog. But Gasol’s ode to McGregor is a sign that the playing fields are beginning to level, if only slightly.

It’s not just America either. McGregor is influencing soccer in England too. Here’s Paul Pogba, a member of the country’s biggest soccer club, Manchester United, with his own version of the strut earlier this week.

In other McGregor news, the fantasy fight between him and Floyd Mayweather is a topic of discussion once again. And while we’re on the record saying that this thing is a pure make-believe and will never happen, it’s producing some primo sound bites from both fighters.

Now Dana White is getting in on the fun. “Conor McGregor … if he touches you, you go to sleep. Floyd puts people to sleep too, with his fighting style, not with his hands,” White told TMZ.

Look at Dana out there throwing haymakers. And you thought he was just a suit.