Will your team get a chance to cut down the nets? 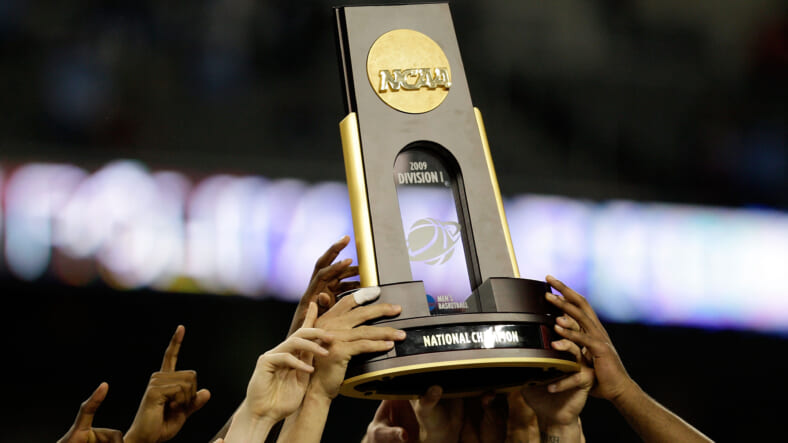 With conference tournaments in full swing this weekend, it’s never too early to look ahead to the NCAA Tournament, which tips off next Tuesday in Dayton.

For the next few days, hoops fans will obsess over who makes the field as bubble teams fight for a chance to squeeze their way into the bracket. There’s little mystery as to who sits atop the field: teams such as Villanova, Duke and Virginia.

According to the latest odds from Vegas Insider, at 9/2 the Wildcats—who won the title in 2016— are the favorite to do it again this year. Duke is not far behind at 5/1. Virginia, the top-ranked team in the country for four consecutive weeks, is 6/1.

Last year’s champs, the North Carolina Tar Heels, are currently getting 12/1 odds. Here are the rest of the teams with a good chance of winning it all, according to Vegas:

Anyone interested in laying down a bet on the tourney before the brackets are even released would do well to stick to one of these squads.

Villanova: Jay Wright’s Wildcats failed to capture the Big East  regular season championship—but they’re still seen as the favorites come tourney time. Credit for that goes to a dynamic backcourt, led by Jalen Brunson with his 19 points per game.

Duke: At 13-5 in the ACC, the Blue Devils haven’t been the most dominant team in college basketball this season. They’re certainly one of the most talented. Led by freshman Marvin Bagley III and senior Grayson Allen, Coach K’s squad is one of the favorites to cut down the nets for good reason.

Virginia: The Cavaliers finished ahead of Duke in the ACC and have been ranked higher for weeks, but still have worse odds to win the title. Blame that on the basketball world’s infatuation with offense. Virginia is one of the best defensive teams in the country and what they lack in flash, they make up for in the ability to hold teams to single digits in a single half.

Michigan State: Despite falling to Michigan in the Big Ten Tournament, the Spartans remain one of the most intimidating teams in the field this year. There might not be a better duo in all of college hoops than Miles Bridges and Jaren Jackson Jr. and head coach Tom Izzo is a legend for a reason.