Is this dirty ball? 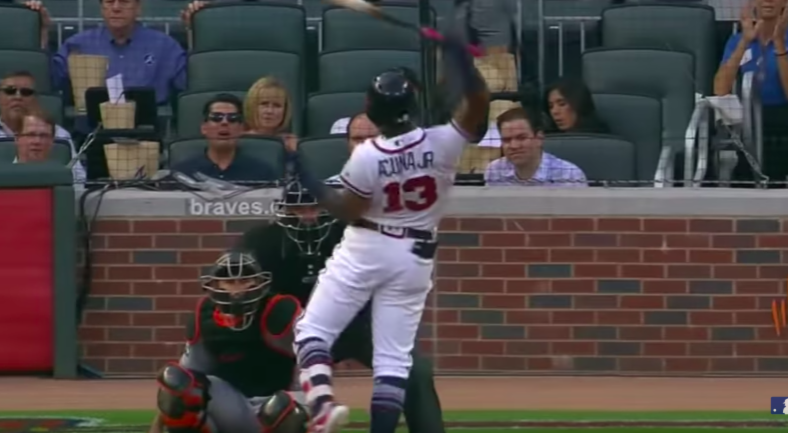 This is some old-school baseball.

Going into Wednesday’s game, Atlanta Braves phenom Ronald Acuna had homered in five straight games, which included three straight leadoff dingers and a two-homer game on Tuesday. On the game’s very first pitch, Miami Marlins starter Jose Urena drilled Acuna — and it is very difficult to view the hit as an accident.

Tensions flare at SunTrust Park as Ronald Acuña Jr. is hit on the elbow with a fastball from Marlins starter Jose Urena.

The benches clear as both teams meet at the mound. #Braves | #ChopOn pic.twitter.com/s1fGrMjezh

Reactions on social media were immediate, and heavily critical of Urena.

Garbage baseball. Hard to throw one pitch and piss off two clubhouses so good luck Jose dealing with the mess you've made.

Imagine if, in the middle of a no-hitter, a hitter charged the mound and whacked the unsuspecting pitcher on the arm with a bat just because the pitcher was dominating.
That's basically what happened with Urena/Acuna.

The fact that Urena dropped his glove as the Braves' bench emptied and seemed to beckon them forward tells you all you need to know about his intent.

One person, however, made a case in support of the pitcher — former Met and current booth man Keith Hernandez.

“They’re killing you. You lost three games. He’s hit three home runs. You gotta hit him,” he said on the Mets broadcast as the Amazin’s took on Baltimore. “I’m sorry, people aren’t going to like that. You know, you gotta hit him, knock him down. I mean, seriously knock him down if you don’t hit him. You never throw at anybody’s head or neck. You hit him in the back. You hit him in the fanny.”

Needless to say, a couple prominent Braves were not at all pleased with his take.

This is just next level bullshit!!!! The kid is playing the game with joy and needs to be hurt for being great. You are a clown @keithhernandez https://t.co/htnJZeQQ1o

So by this way of thinking, Jacob deGrom should get drilled cuz he’s the hottest pitcher on the planet? NO! I enjoy watching him pitch and I enjoy watching RAJ play the game. I’m old school just like this broadcaster, but these comments are waaay off base! https://t.co/N21hLVxBef

For his part, Urena is taking the “pitching inside” defense. The Miami Herald reports:

“I think for me I feel pretty bad,” Urena said. “People get upset and things like that, but I got upset too because how am I going to wait five days to go out there and make one pitch and get kicked out of the game? That don’t make sense, right? Always I throw inside. That’s my way for to get outs. I go inside try to take advantage and try to move [the batter’s] feet and that’s the thing.”

The good news is that Acuna escaped serious injury — the Braves announced that his CT scan came back normal.

Do you think Urena was playing dirty ball?