“My man got hit in the head with a helmet. I’ll accept whatever penalty it is.” 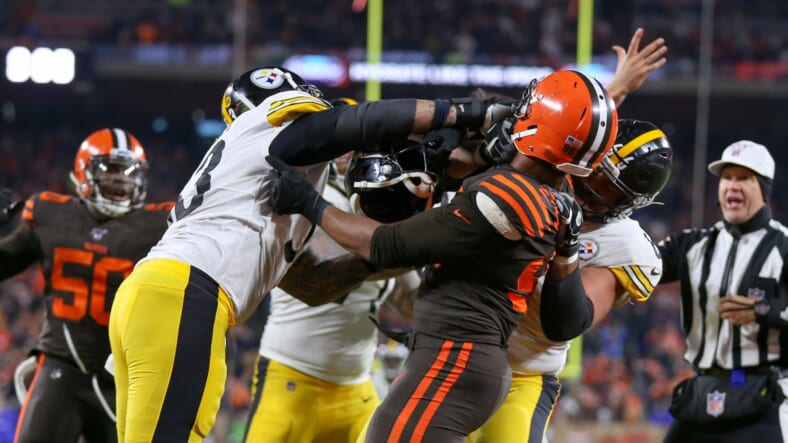 Pittsburgh Steelers center Maurkice Pouncey is being hailed as a hero for defending his quarterback during a brawl that erupted late in the Steelers Thursday night matchup with the Cleveland Browns.

Seconds before the Browns secured a 21-7 win over the Steelers, Browns defensive end Myles Garrett ripped off Steelers QB Mason Rudolph’s helmet and bashed him in the head with it. Pouncey responded by throwing a wild flurry of punches and kicks at Garrett.

Both Pouncey and Garrett will likely be suspended by the NFL for their actions, the New York Post reports. But players across the league are praising Pouncey on Twitter for defending his his play caller after the disgraceful and dangerous attack by Garrett.

Just so yall know that inside a @nfl locker room @MaurkicePouncey is a hero. He protected his QB and he was willing to risk it all for his teammate. Ain't many dogs like that left in the game. He should be fined but no Suspension for Pouncey. That's a REAL TEAMMATE! @nflnetwork

“Just so yall know that inside a NFL locker room Maurkice Pouncey is a hero,” NFL legend and analyst Deion Sanders tweeted. “He protected his QB and he was willing to risk it all for his teammate. Ain’t many dogs like that left in the game. He should be fined but no Suspension for Pouncey. That’s a REAL TEAMMATE!”

“Everyone on the Steelers is giving him fist-bumps for what he did this morning,” former Jets lineman Damien Woody said in an interview with ESPN.

Bro i can’t even believe that just happen.

That. Is. Insanity. Wow.

Damn this fight taking away from Melo shine 🤦🏾‍♂️

After the game, Pouncey told reporters that Garrett “Absolutely. 100 percent” should be suspended. “We’ll see how serious the NFL is about their players,” he added.

When Pouncey was asked about any repercussions coming his way, he said, “At this point, who cares? My man got hit in the head with a helmet. I’ll accept whatever penalty it is.”

On Friday, the NFL announced that Garrett has been suspended indefinitely for his helmet-swinging attack, while Pouncey and Cleveland’s Larry Ogunjobi also received suspensions for their roles in the fight, and each organization was fined $250,000.

Garrett – who was at the center of the fight when he bashed Steelers quarterback Mason Rudolph over the head with Rudolph’s helmet – is suspended at a minimum of the remainder of the regular season and postseason without pay. He also has to meet with commissioner Roger Goodell for reinstatement, as well as pay an individual fine.

“Garrett violated unnecessary roughness and unsportsmanlike conduct rules,” NFL’s statement read. “As well as fighting, removing the helmet of an opponent and using the helmet as a weapon.”

Pouncey was hit with a three-game suspension without pay and an individual fine for coming to Rudolph’s defense by punching and kicking Garrett. Ogunjobi was suspended for one game without pay with an additional fine after he pushed Rudolph in the back after the QB had been pulled away from Garrett.

“Additional discipline for other players will be forthcoming through the standard accountability process, including those players that left the bench to enter the fight area,” the league statement said.

Garrett has said he “made a mistake” and regretted the incident.

More from Myles Garrett: "I made a mistake, I lost my cool. It's going to come back to hurt our team. The guys who jumped in the scrum, I appreciate my teammates having my back but it shouldn't have gotten that far." https://t.co/Te0wunuwsq

Meanwhile, Rudolph called him a “coward” after the game.

“I know it was bush league, total coward move on his part.”

Steelers fans have already set up a GoFundMe with a $50,000 goal to help pay off Pouncey’s fines.