At Sunday’s Golden Globes, Streep said MMA is “not the arts.” 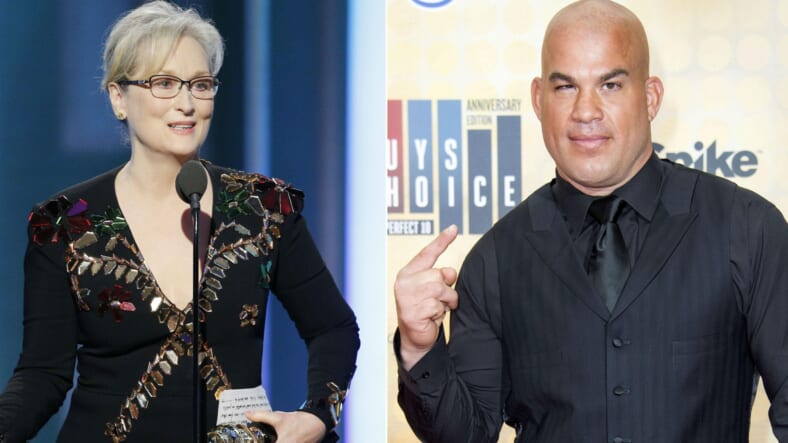 Of all the people who might have dropped an MMA reference at Sunday’s Golden Globe Awards, iconic actress Meryl Streep had to be among the least likely. (My money would have been on Vince Vaughn.) But then it happened, as Streep was accepting the Cecil B. DeMille Lifetime Achievement Award and praising the contributions of immigrants in Hollywood, she said this: “Hollywood is crawling with outsiders and foreigners. And if we kick them all out, we’ll have nothing to watch but football and mixed martial arts, which are not the arts.”

The crowd went wild, but at home, MMA fans got angry. The social media reaction was immediate and forceful. Not so much because Streep declared MMA not to be “art,” but because in a speech about acceptance and generosity, she went out of her way to rag on the popular sport.

Meryl Streep: MMA IS NOT ART.

Not everyone with an interest in MMA reacted negatively, though. Scott Coker, President of Bellator, saw Streep’s remarks as an opportunity. Late Sunday evening he fired off an invitation for Streep to attend Bellator 170, a night that will be headlined by a mega-fight between Tito Ortiz and Chael Sonnen.

As a martial artist and an MMA promoter, here is my open letter and #Bellator170 invite to the very talented #MerylStreep #GoldenGlobes pic.twitter.com/zostN22RAK

Coker’s no dummy. He doesn’t really expect Streep to show up at the fight, but he knew his invitation would get attention. And, on the off chance that Streep does feel contrite and takes Coker up on his generosity, there will be even more attention. For the sake of awkwardness, let’s hope she does.