“If Michael B. wants this for real, contact Roy Jones Jr. and we’ll make it happen.” 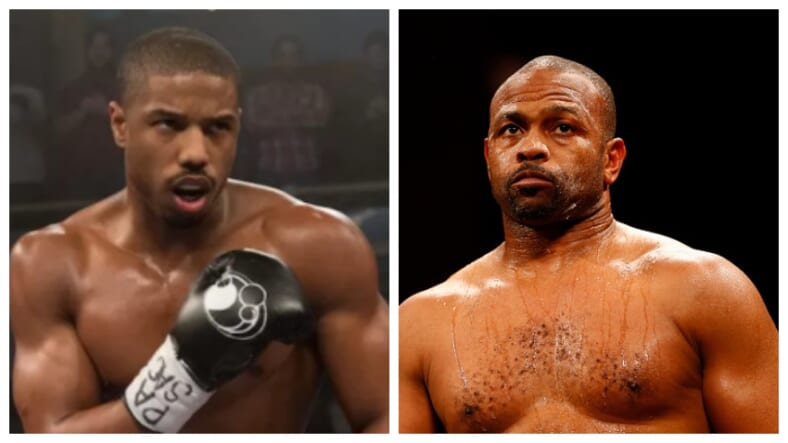 Boxing’s former pound-for-pound king Roy Jones Jr. is almost 50 years old, but age won’t keep him from ducking a challenge–especially from an actor calling him out to step back into the ring.

So when Creed II star Michael B. Jordan issued one in an offhand way while speaking to TMZ, the retired Jones said he was ready to go.

TMZ Sports cameras caught up with Jordan in Hollywood and asked him who he’d take on if he could, and he said, “Roy Jones, that’s my dude, bro. I feel like I could do my thing a little bit. I could hold my thing, right now, but in his prime, nah.”

In a response given to TMZ, Jones said he wouldn’t hesitate to step in the ring with the seriously shredded Jordan, who has transformed his physique for roles in Black Panther and the Creed movies.

“I ain’t running from nobody,” he said in part, “If Michael B. wants this for real, contact Roy Jones Jr., and we will make it happen.”

It likely wouldn’t be much of a contest. Jones, who is featured as a fight commentator along with real-life HBO boxing analyst colleagues Max Kellerman and Jim Lampley, surely still has more than enough pugilistic skills to clown the younger man in the ring.

But will it actually happen? It’s obvious Jordan was popping off in a random convo, so it seems pretty unlikely.

Sadly, Jordan wouldn’t be able to meet the challenge with the ghost of Apollo Creed by his side. In Creed II, however, his character almost did. No, seriously, according to Business Insider, director Steven Caple Jr. said that was originally in Sylvester Stallone’s script:

“Sly had a ghost version at one point,” Caple told Business Insider.The idea Stallone had was that while Adonis Creed (Michael B. Jordan) is recovering in the hospital from his first fight with Viktor Drago (Florian Munteanu), for a brief moment while in and out of consciousness he would see his father, Apollo, standing in the corner of the room.“In regards to tone, it wasn’t on my level of where I was going with the film,” Caple said. “Sly had it in just as an idea we could use, but I thought it might throw people off. And then I was thinking what does Apollo wear? Is it [actor] Carl Weathers today or from back in ‘Rocky IV’?”

So yeah, some kind of Obi Wan Kenobi in Star Wars stuff could’ve gone down. Caple actually came close to meeting Stallone halfway on this point, though, proposing that Jordan’s character hear his father’s voice say, “Get up, son” after a knockdown.

Ultimately it obviously didn’t work out, and that’s probably good, because it sort of sounds like the kind of thing critics might’ve ripped to shreds.

The “Apollo’s Ghost” and Jones fight have something in common, if you think about it: Both are dumb ideas. And just like the ghost appearance, the boxing match probably won’t happen either.