“I love the fact that he thinks that way…” 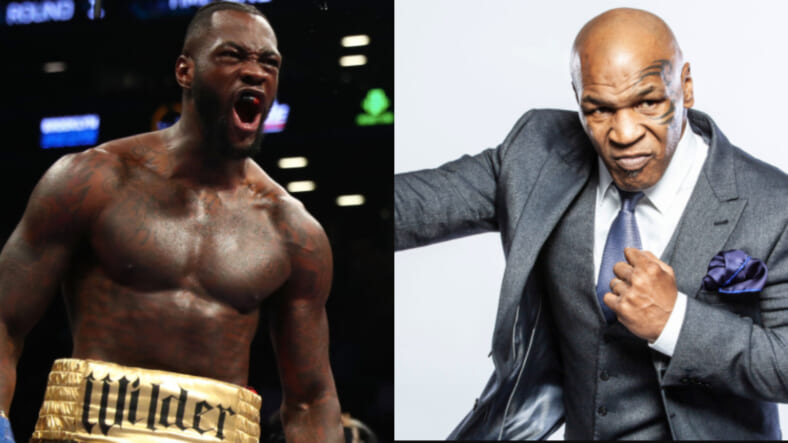 No regular guy in his right mind would make a public claim he could kick Mike Tyson‘s ass. At 54, Tyson is, in some ways, just as formidable as ever. He comes across like a self-effacing teddy bear when doing voiceover for his Adult Swim cartoon, but multiple videos of the former heavyweight working out in the last year show a man who is still dangerous.

Unless you’re a fellow heavyweight champ like Deontay Wilder, that is.

The 6’7″ former WBC heavyweight titleholder said in a 2018 TMZ interview that he could “kick the hell outta” 1986 Tyson, and he meant it.

Tyson was first asked about Wilder’s comments soon after and at the time he said he didn’t think Wilder could back up the assertion.

"I love the fact that he thinks that way because that's what I would say as well!" 👊@MikeTyson was as humble as they come when asked what he thought of Wilder saying he would beat him 👏 pic.twitter.com/lwuR78jjtr

However, in an early 2020 video interview for a BT Sports documentary, Round 12: Fury’s Resurrection—about the first fight between Wilder and Tyson Fury—Mike Tyson had what was likely the only kind of answer a 50-something fighter could give, mature and considered. “I don’t know,” whether Wilder was right, he said.

However, Tyson continued, “I love the fact that he thinks that, because that’s the way I would think as well.”

“He’s supposed to think that way,” Tyson said, “he is the heavyweight champion of the world and that’s something very special.”

As for Tyson, while it’s true that at his age he might be at a disadvantage against the thirty-something Wilder, he’s still plenty ready to get back in the ring and face 51-year-old Roy Jones Jr., as recent videos of the former champ looking ripped and sparring with ferocious energy seem to prove.

Recently, Deontay Wilder has been getting clowned for making excuses for his blowout loss to another Tyson—Tyson Fury. He lost the WBC heavyweight championship to Fury in February 2020 and only began commenting on the match in October. He’s made some odd claims about why he lost, including that Fury had egg weights in his gloves.

Tyson Fury’s response was perhaps telling, given he has a history of making controversial statements all his own. “I think he has lost his marbles,” Fury said of Wilder in an interview with Talk Sport.

“First of all it was the suit, then it was the bicep injury, then his trainer was on our team, then the referee was against him, then I had weights in my gloves. Now someone has spiked his water. It’s one of those things, isn’t it.”

Fury and Wilder were set for a July rematch but due to COVID-19 that has been delayed.

Roy Jones Jr. and Mike Tyson square off at the Staples Center in Los Angeles on November 28. The fight will livestream on TysonOnTriller.com and FITE TV.