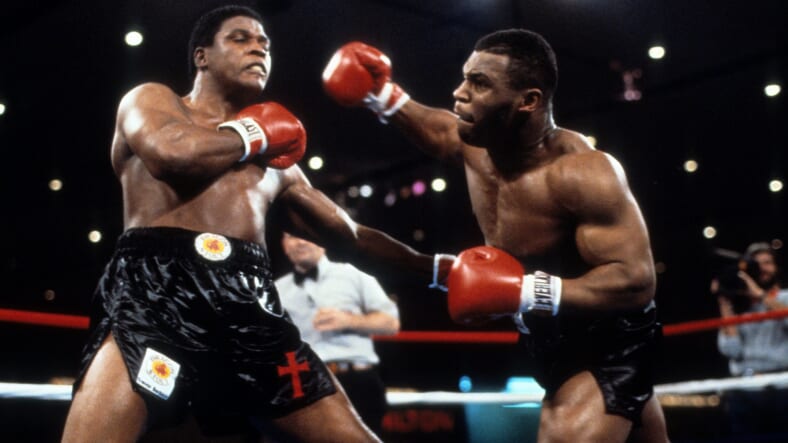 Thirty years ago, Mike Tyson couldn’t yet call himself a champion. At 20 years old, he’d only been fighting professionally for 21 months. But he’d been fighting a lot. By the time Tyson met Trevor Berbick at the Hilton Las Vegas for the WBC World heavyweight title, “Iron Mike” was a scary knockout machine who had build a 27-0 record, with only two of his fights making it to a decision.

And so he stepped into the ring on November 22, 1986 with supreme confidence. The taller Berbick, who was the last man to have fought Muhammad Ali, had size and reach on Tyson, but that was where his advantages ended. When the opening bell of the fight rang, the Jamaican-born champ looked scared shitless.

The trouble for Berbick started right away when he came out and tried to punch with Tyson. Problem was, Tyson was the only one landing anything. About a minute into the first round Tyson connected with a right to the back of Berbick’s left ear, drawing “ohhhs” from the crowd.

As the first round continued, Berbick retreated into himself. He stopped throwing punches and entered survival mode. That only made Tyson attack more aggressively and the 20-year-old phenom nearly planted Berbick on his butt as the round came to a close.

When the second round began, Tyson clearly had a plan: Blitz Berbick. He hit the champ with a flurry of punches that ended with a left hook that knocked Berbick down.

Berbick popped up quickly after this and grinned as referee Mills Lane counted to eight. He would not be grinning for long. Berbick tried to delay the inevitable by hugging Tyson and drawing out the round, but it all came to a screeching halt when Tyson caught him with a brutal left hook to the temple.

What came next was almost hard to watch as Berbick stumbled around the ring trying to regain his balance to continue the fight. Fortunately for him, he couldn’t and Lane ended it.

At 20 years old, Mike Tyson was officially the youngest champ ever. He would continue winning fights and belts until that fateful night in Tokyo when Buster Douglas, an enormous underdog, showed Tyson what it was like to be on the other end of of the GIF.