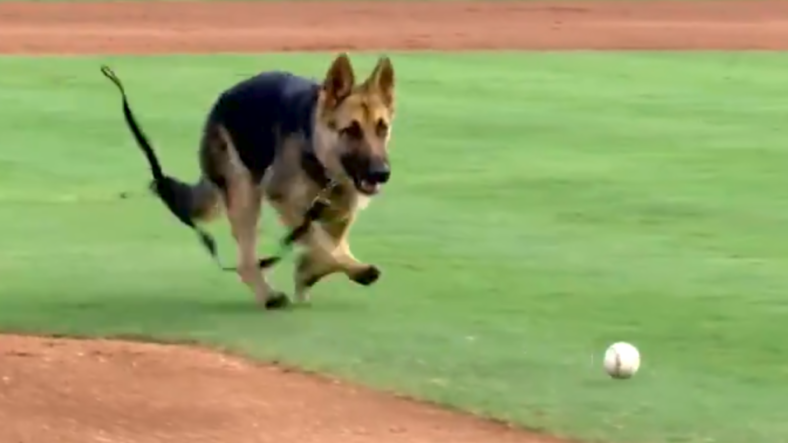 While at the (@TulsaDrillers) game .. dog night at the park .. one dog saw a ball .. and go figure. #Dogs pic.twitter.com/6ws99cEQqR

In the above video recorded by local news anchor, one German Shepherd couldn’t control her instincts to be a very good girl, and bolted after a baseball thrown by one of the players. What followed was surely the best game of fetch ever recorded at a minor league ball park.

Watch it again from a second angle—you know you want to.

Though unplanned, owner Emily Diacon said the dog received “a ton of treats” for executing the impromptu play.

For perhaps the first time ever, Twitter users unanimously agreed that the clip is fantastic.

Met a new friend tonight at the ballpark! @nwanaturals pic.twitter.com/68o0lxBeEB

Oh, my favorite part is the beginning when the white pooch whips his head around like, "Ohhhhhh, you're gonna be in trooouuuuble…"

He worked hard in this heat to get the ball. They should've let him play more! Good boy for getting it!

Hi, Harold. Can I show this video to Carol in Accounting? Trying to make more friends at work. Will give you credit.

Dog brought it back let him play

Nothing brings people together like good dogs and baseball.