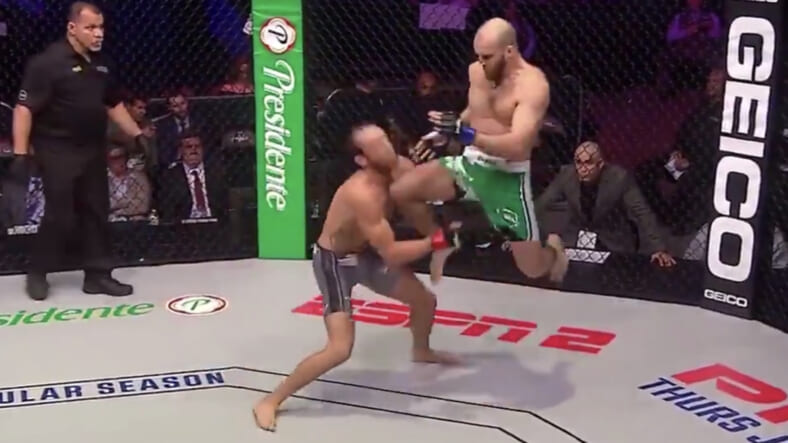 If anyone watches this without flinching, step away from them because something is wrong. This almost immediate flying knee knockout in the first round of a recent Professional Fighters League (PFL) match on Long Island between Damon Jackson and Movlid Khaybulaev is the stuff of martial arts action movies.

Only, of course, this is painfully real.

It really may be the Knockout of the Year, for its brutal visual perfection alone.

A video still of the moment tells the whole story, really: first, Jackson’s head is snapping back too fast for even a hi-def camera to catch his expression; second, Khaybulaev looks like he’s in The Matrix.

It was a hell of an introduction to Khaybulaev, who has fought in Russia with ONE Championship, according to USA Today.

But we’re not just hyping, here. The reaction on social media from MMA enthusiasts was mostly characterized by total awe.

I folded the same way when I found out I was out of coffee this morning!!!@ProFightLeague #PFL2 #PFLmma pic.twitter.com/I9ELLNYAkj

There are plenty more such responses where those came from.

Jackson is reportedly fine—after all you don’t go anywhere in MMA if you have a glass jaw, even after a nasty blow like that—but he probably doesn’t like being on the receiving end of one of the fastest knockouts ever.

That said, even he would probably admit this was a thing of painful beauty.