You need to see this double knockout to believe it. 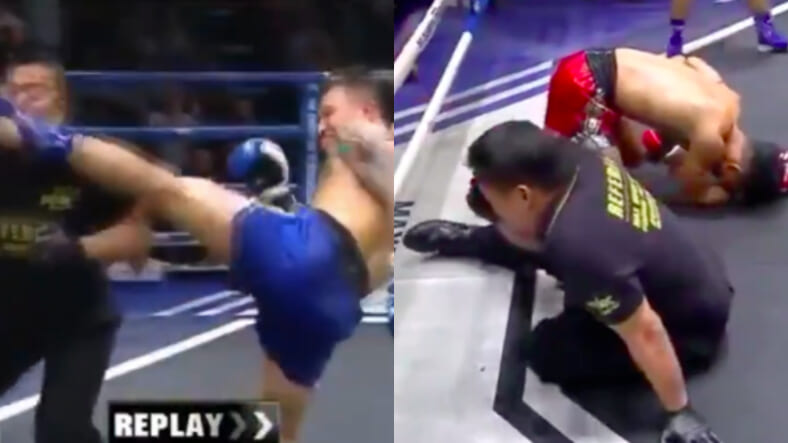 Crazy scenes unfolded at todays Max Muay Thai, as Gou Dakui knocks out both his opponent and referee at the same time. pic.twitter.com/jfrFeVsPo6

A Muay Thai referee inadvertently demonstrated just how dangerous the combat sport can be when he got knocked out while trying to stop a fight in a truly insane viral video.

Chinese striker Gou Dakui was just regaining his momentum after being dropped in the first round of a Max Muay Thai match against Thailand’s Super X Sitsontidech on Saturday.

With just over a minute left in the second round, Dakui connected with a giant right that visibly wobbled Sitsontidech. As the ref ran in to break things up, Dakui uncorked a high kick that blasted the official square in the face. He was quickly joined on the canvas by Dakui’s defeated opponent.

As The Sun notes, both commentators were initially shocked by the double beatdown.

After watching the replays, they agreed that the second hit was clearly unintentional.

BJ Penn reports that Dakui’s was awarded the win by TKO to improve his record to 21-9, while Sitsontidech’s record drops to 60-32 after being knocked out for the fifth contest in a row.

Watch the full fight below: