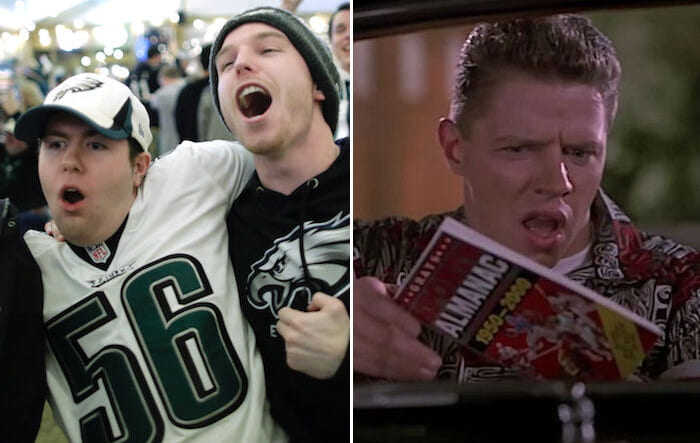 The mysterious bettor who won $10 million on an unlikely string of World Series bets added at least another $6 million to his bank account after the Eagles won the Super Bowl Sunday.

Known as Bettor X—or Biff Tannen, Jr. as we like to call him—the unknown gambler put $3 million on the Eagles at the MGM, $1 million with William Hill U.S. and scattered six-figure bets at several other sports books, according to ESPN.

Little is known about the mysterious bettor, except that he’s not Clint Eastwood or Matt Damon, as Nick Bogdanovich of William Hill told Las Vegas’ Fox 5.

“I know his name, but I don’t know anything about him,” Bogdanovich said. “So far he’s only won … He could be the greatest gambler in the history of the world, or he could be the worst. We don’t know. It’s only eight bets.”

But those eight bets have been so lucrative for Bettor X that he has the attention of many in Vegas, ESPN says.

ESPN spoke to multiple bookmakers who have taken Bettor X’s action and were scratching their heads Monday, trying to figure out he has an edge or if it’s all just a run of luck.

Bettor X didn’t need to be a genius to cash on Sunday. Plenty of casual gamblers took money home too. In fact, Vegas only profited $1.2 million on the game, far less than the  $9.8 million sports books took down last year. Some sports books even took a loss, including William Hill, which was down by a seven-figure sum.

The sports books got killed Sunday by the offensive explosion, which rewarded everyone who bet the over on points and yards, and plenty who put money on individual props. What’s wild, as betting expert RJ Bell notes, is that even with the game going as well as it possibly could for bettors, Vegas still made a profit.

Reason #17 why Bookies should NEVER complain …

The Super Bowl went about as well as possible FOR THE BETTORS, and even so – when the official figures are soon released there's still a good chance that the Nevada bookmakers will profit (in net) for the 26th time in 28 years!

Lucky for the sports books, not all bettors are as good the mystery man.