But least one legendary NASCAR driver is NOT having it. 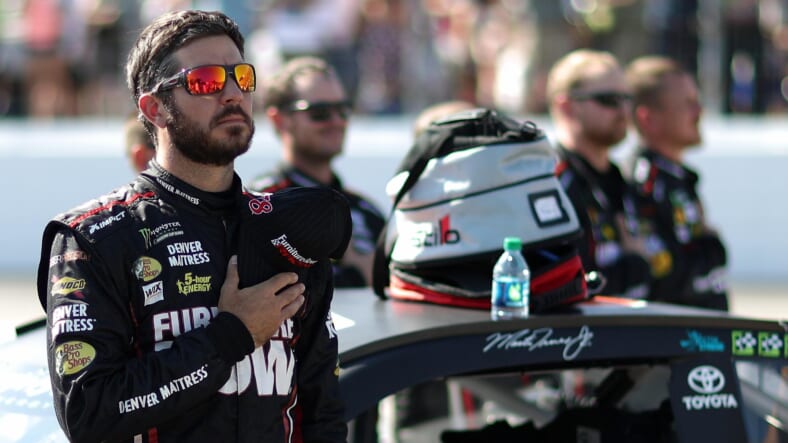 More than 100 NFL players took a knee during “The Star Spangled Banner” on Sunday in response to President Trump’s fiery comments slamming players who kneeled during the National Anthem.

But during Sunday’s NASCAR Cup Series opener in Loudon, New Hampshire, seemingly all drivers, crew and team members stood with their hands on their hearts before the race after multiple team owners threatened to fire drivers who refused to do so.

Several team owners and executives had said they wouldn’t want anyone in their organizations to protest.Richard Childress, who was Dale Earnhardt’s longtime team owner, said of protesting, “It’ll get you a ride on a Greyhound bus.” Childress says he told his team that “anybody that works for me should respect the country we live in.” “So many people gave their lives for it. This is America.”

Dale Earnhardt Jr.—who’s set to retire with a staggering 26 wins at the end of this season—disagreed with his late father’s former colleague.

The racing legend came out in support of Americans’ “granted rights” to conduct “peaceful protests” and quoted President Kennedy in a tweet.

Seven-time NASCAR champion and team owner Richard Petty took the strongest stance on the issue. The 72-year-old Hall of Fame driver said that anybody who takes a knee should be thrown “out of the country. Period”

Richard Petty’s sentiments took it a step further, saying: “Anybody that don’t stand up for the anthem oughta be out of the country. Period.”“What got ’em where they’re at? The United States.”When asked if a protester at Richard Petty Motorsports would be fired, he said, “You’re right.”

NASCAR’S organization-wide refusal to protest garnered praise from President Trump, who tweeted that he was “proud” of supporters and fans who “won’t put up with disrespecting” the flag.

As the final game of NFL Week 3 commences Monday night, many are wondering if the Dallas Cowboys owner Jerry Jones—who contributed $1 million to Trump’s inauguration fund—will protest alongside his players before taking on the Arizona Cardinals in Phoenix.