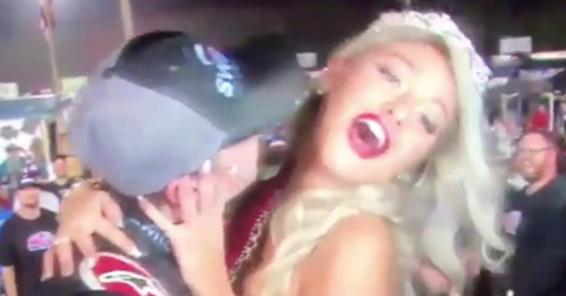 A NASCAR prodigy’s big win at the 51st annual Snowball Derby was briefly overshadowed when he crashed and burned on live TV.

During his post-race celebration at Pensacola’s Five Flags Speedway, the 20-year-old stock car racer was painfully rejected when he tried to kiss a Snowball Derby model in a now-viral video.

This is hilarious 😂 incredible effort 👏👏

Shooters shoot…. congrats @NoahGragson on the win, not this epic fail! https://t.co/jpAgfPsQ9C

The thirsty winner did end up getting a peck on second attempt in a video he tweeted to his followers.

ESPN reports that this was Gragson’s final race with Kyle Busch Motorsports. He has signed with Dale Earnhardt Jr.’s JR Motorsports to compete in the NASCAR Xfinity series.