Dana White said the encounter was “fun,” and he was “sure a lot of bad things were said.” 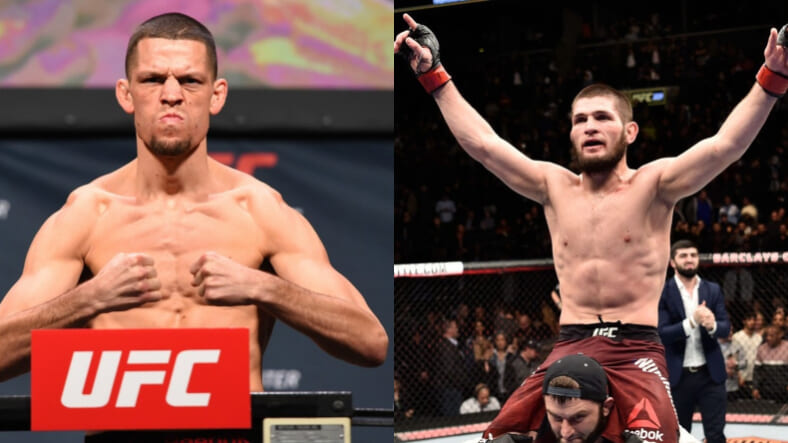 Nate Diaz and Khabib Nurmagomedov had an exchange of their own at UFC 239 in Las Vegas.

Video above shows a cage-side verbal altercation between the two MMA stars very nearly turn physical at the action-packed event, which saw the fastest knockout in the organization’s history and two successful title defenses in the men’s light heavyweight and women’s bantamweight divisions.

Diaz appears to be talking trash to Nurmagomedov and his team. The Russian fighter then steps over a row of chairs before security intervenes and separates the fighters. Check out another angle here:

“They got into a fight, Khabib and Diaz, talking shit to each other back and forth,” UFC President Dana White confirmed at the post-fight presser. “Everybody broke it up, we moved Diaz and then Diaz left after the [Gilbert] Melendez fight.”

“Those two were within two rows of each other and then they started to get into a fight and we broke it up,” White added in another interview per Low Kick MMA.

“We got it handled. Fun. I’m sure a lot of bad things were said. I don’t know exactly, but I’m sure it was not good.”

MMA Fighting notes that their mutual feelings of animosity stem all the way back to a World Series of Fighting event in 2015, when Diaz reportedly threw punches at Nurmagomedov.

Their new UFC 239 fracas certainly sets the stage for a Diaz-Nurmagomedov superfight.

Before that happens, Diaz will face Anthony Pettis at UFC 241 on August 17, and Nurmagomedov will defend his lightweight title against Dustin Poirier at UFC 242 on September 7.

In a matchup between The Eagle and the Stockton Slapper, who ya got?