“Bud Light Guy” made the play of the game on Sunday night. Plus: two Instagram models were banned from MLB games for flashing their chests on live TV. 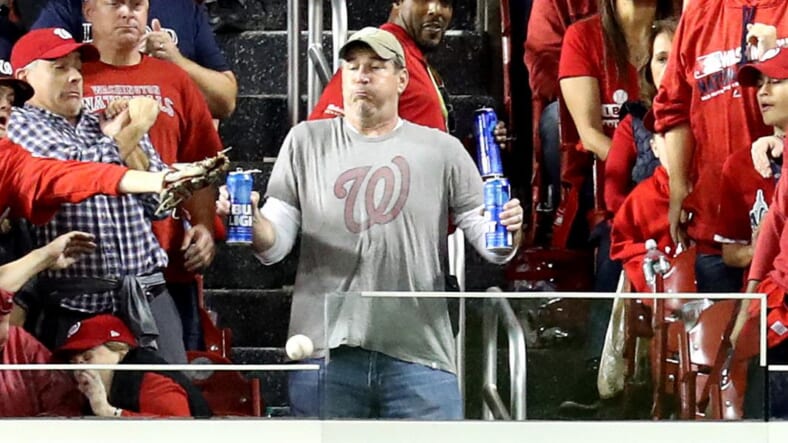 The most spectacular play of the World Series thus far was made by a beer-loving fan who took a home run ball to the chest.

Video of the viral moment was recorded during Sunday night’s broadcast of Game 5, which saw the Houston Astros (3-2) improve their championship record with a decisive 7-1 win over the Washington Nationals (2-3).

During the second inning, Astros slugger Yordan Alvarez hit a two-run homer over the wall in left field. Standing directly in the ball’s path was a Nats fan in a grey shirt who was double-fisting a pair of a Bud Light tall boys, Business Insider reports. Instead of sacrificing one or both his brews, he postured up and took Alvarez’s dinger directly on the right side of his chest in heroic fashion.

The fan, identified as Washington, D.C.Jeff Adams, has been fittingly nicknamed “Bud Light Guy.” Adams told the Washington Post that his time playing catcher in Little League helped him react.

Fellow baseball fans across Twitter were quick to laud Adams for the valiant effort, noting that he definitely has his priorities in order.

When your hands are full of beer, you catch the home run ball with your chest pic.twitter.com/twC1Bf7AIB

Adams’ wasn’t the only viral moment from Game 5. In another wild video, two Instagram models were caught flashing their breasts on live television.

Shagmag founder Julia Rose and “brand executive” Lauren Summer flashed their chests in an attempt to distract Astros star pitcher Garret Cole. Both were subsequently banned indefinitely by the MLB.

The New York Post has further details on the NSFW incident:

Taking to social media early Monday, Rose and Summer shared the letter they had received, which noted a violation of rules of fan conduct.“During the game, you violated the fan code of conduct by exposing yourself during the 7th inning, in order to promote a business,” the letter read.It appears the women were promoting breast cancer awareness.

Who knows what kind of crazy developments will unfold during Game 6 of the World Series on Tuesday night.