The Toronto Raptors biggest fan is in hot water after calling Kendrick Perkins “a f*cking pussy.” 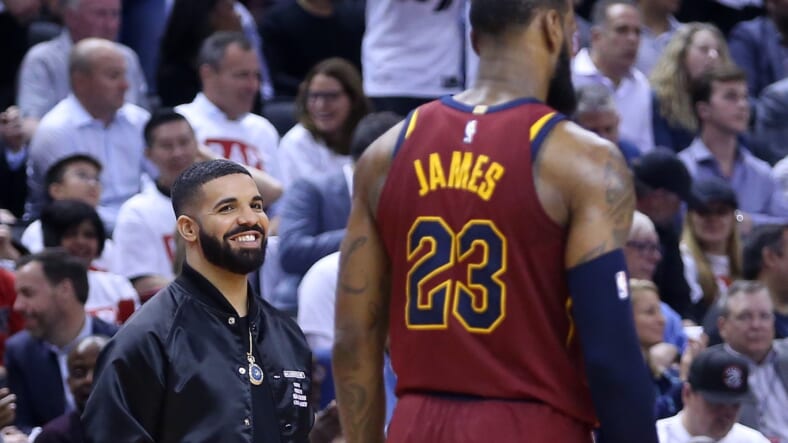 On Tuesday night, Toronto Raptors global ambassador and world-famous rapper Drake got into a verbal spat with Kendrick Perkins, the little-used center for the Cleveland Cavaliers.

On Thursday, ahead of the Raptors second game against the Cavs, the league told its most famous fan to shut up. USA Today reports that both the league and Raptors have issued warnings to Drake for popping off to Perkins. And it wasn’t just the fact that Drake mixed it up with a player. It was also what he said.

According to one reporter who was close enough to over hear things, Drake called Perkins a “fucking pussy.“

Perkins later told ESPN that the whole kerfluffle started when Drake overheard him talking to his former teammate and current Raptor Serve Ibaka.

“[I was] telling [Ibaka], ‘We about to win this game,’ and Drake butted in talking shit to me,” Perkins said. “He said something slick, so I said something back: ‘Sit your ass down and watch the game.'”

There weren’t any more fireworks Thursday night as LeBron James made sure that Drake wouldn’t have anything to talk about. The Cavs superstar put up a 43 points, 14 assists and 8 boards as Cleveland rolled the Raptors 128-110 to go up 2-0 in the series. No wonder they started calling Drake’s hometown LeBronto.

With his team getting trampled, Drake didn’t have any shit to talk. Instead, he buried his head in his hands and prayed that his team won’t get swept when it goes to Cleveland for three games.