This sounds crazy enough to be true. 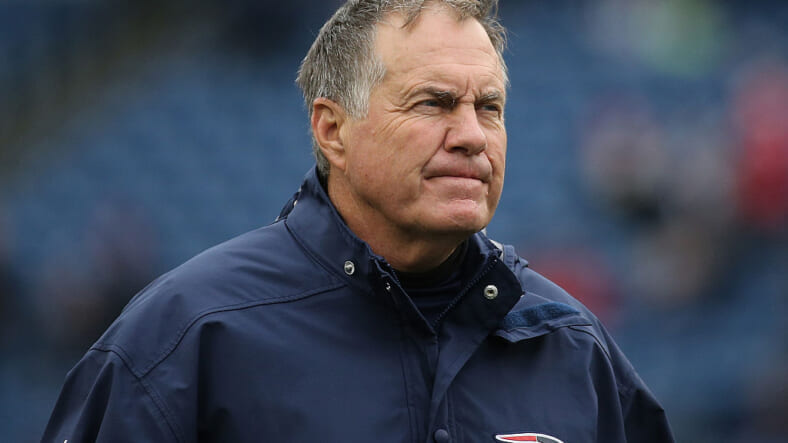 Today, on As Foxborough Turns: An anonymous source tells the New York Daily News there’s a chance Bill Belichick will move on.

That’s so crazy you might want to read it twice. Yet as the News reports, the Patriots‘ ongoing drama surrounding Tom Brady’s weirdness might be driving the Hoodied One out the door:

“I’m sure Bill knows this is his last chance to be the Giants coach,” a source close to Belichick said Friday. “Bill sees an opening — an opening to get to the Giants.”The source has not spoken to Belichick since the story came out, but is very familiar with The Hoodie’s desire to coach the Giants.The source also said he’s not certain if the reported friction and tension in New England will prompt Belichick to force his way out, but if he does, he said he is certain, “The Giants are the only place he wants to be.”

To insiders within the cloistered and secretive environment of Gillette Stadium this might seem like a logical sequence of events. After all, Belichick was reportedly damn displeased at trading Jimmy Garoppolo just to assuage the 40-year-old Brady’s ego.

Social media reaction to a possible Belichick move back to the Giants—where he coached from 1979 to 1990—has been mixed, as you might expect.

If you think the Giants can make a run at Bill Belichick you are a mouth breathing window licker who should never be allowed to watch football again.

This Belichick – #NYGiants stuff is click bait. The Giants don't give coaches total control. They have a GM and a coach. Separate. Belichick's not having that. They didn't do it for Parcells, Reeves or Coughlin and they're not doing it for Belichick. #NFL

I just said on ESPN radio with @AnitaMarks that there is a better chance for a Mars Landing then Belichick coaching the Giants next year.

Pats owner Bob Kraft threw some cold water on talk of a Belichick exit as well, telling Sports Illustrated that “he believes ‘absolutely’ Belichick will be the coach of the team in 2018.”

A Boston Globe columnist seems convinced Belichick isn’t going anywhere. But he asks readers to “imagine what it’s going to look like around here if Patriots coordinators Josh McDaniels and Matt Patricia leave (…) then Belichick shocks the world and goes to the Giants. Try to imagine Bob Kraft left with a 41-year-old quarterback and no head coach.”

That’d be a hell of a story, yes. But at the moment, given the pushback Kraft, Belichick, and Brady have given these reports, it seems pretty unlikely.