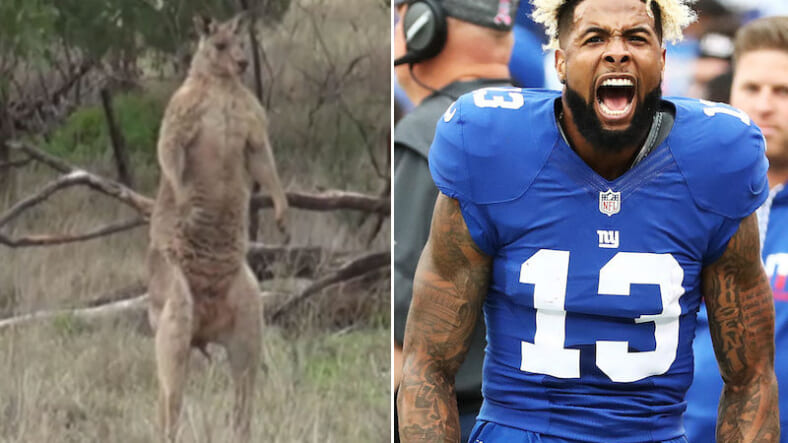 New York Giants coach Ben McAdoo, who hasn’t been afraid to turn to novel sources in an attempt to inspire his team, recently tried to inspire his players with the viral video of an     Australian zookeeper punching a kangaroo. It must have worked. The Giants edged out the Cowboys 10-7 in a Sunday night nail-bitter.

What the hell does a dude punching a kangaroo have to do with football? We’ll let McAdoo explain what he was trying to communicate:

“Just to not be scared, I think that’s what he was going for with that one,” Wing said. “Just to rise to the opportunity and just kind of react, just play without thinking too much.”

The video may have worked for McAddo, but it’s caused quite a headache for Greig Tonkins, the dude who stunned the animal with his right fist. Not only has PETA called for his firing, but he’s been fielding death threats since the video went viral. Last week, he reportedly called police to his home because he feared animal rights activists were surrounding his home and planning to drown him in a drum of patchouli.

What makes this whole saga worse is that Tonkins is by all accounts a good dude. In fact, the stroy behind the kangaroo encounter illustrates that best. Tonkins was reportedly on a hunting trip with a group of friends, including a 19-year-old with terminal cancer who was hoping to bag a boar before the sickness killed him.

Plus, Tonkins didn’t even hurt the kangaroo, according to one of his buddies who witnessed the whole thing.

“It was funny because the guy who did it is the most placid bloke. We laughed at him for chucking such a sh*t punch,” the friend said.