An uproar over the Dolphins potential punishments for kneeling sent the league into panic mode. 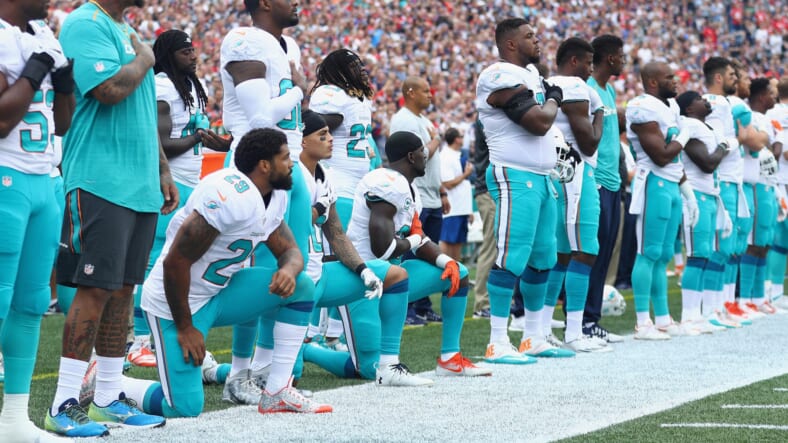 Seven weeks before the NFL season begins, the league is pressing pause on its controversial national anthem policy, adopted just two months ago. The policy would allow players to stay in the locker room during the national anthem. If they chose to take the field though, they would be required to stand. And if they still took a knee, the team, not the player, would be fined by the league.

The NFL left it up to teams to choose how to mete out punishment to players and it was the plan of one of those teams that caused the league to backtrack on Thursday.

The change came after the Miami Dolphins submitted paperwork to the NFL that included a long list of behaviors, categorized as “conduct detrimental to the club,” that could lead to a fine or suspension. Among the the behavior listed was improper “anthem conduct.” The suggestion was that players on the Dolphins could be suspended for up to four games for kneeling during the anthem.

The Dolphins claimed they never had any intention of suspending players for violating the league’s anthem policy and that it was only included on the list of “conduct detrimental to the club” as a technicality.

Still, the suggestion that players might be sidelined for four games for making a political statement was not popular on Twitter.

Jameis Winston was suspended 3 games for groping a woman. https://t.co/mYn3KTtNCE

You can sexually assault a woman in the NFL and get suspended for less games than protesting the anthem. Let that sink in. https://t.co/Meiuy26mBl

When the NFL realized that it might have “31 more PR disasters” on its hands as each team submitted its own versions of the paper that causes this disaster, they put a pause on the policy.

31 other teams will submit similar statements to NFL declaring how they might potentially discipline players for any number of rules violations as they do each year. And now, all of them will be scrutinized for how they individually address protests.

“The NFL and NFLPA, through recent discussions, have been working on a resolution to the anthem issue,” the league and the player’s union said in a joint statement. “In order to allow this constructive dialogue to continue, we have come to a standstill agreement on the NFLPA’s grievance and on the NFL’s anthem policy. No new rules relating to the anthem will be issued or enforced for the next several weeks while these confidential discussions are ongoing.”

Where the NFL goes from here is unclear. The league has long been eager to put this issue behind them, but Roger Goodell and his fellow front office suits are much better at creating fires than they are at putting them out. And with the NFL season just weeks away from starting, don’t expect this one to get extinguished any time soon.