NFL Fans Taunt Tom Brady After He Throws ‘Worst Interception of His Career’ Vs. Saints 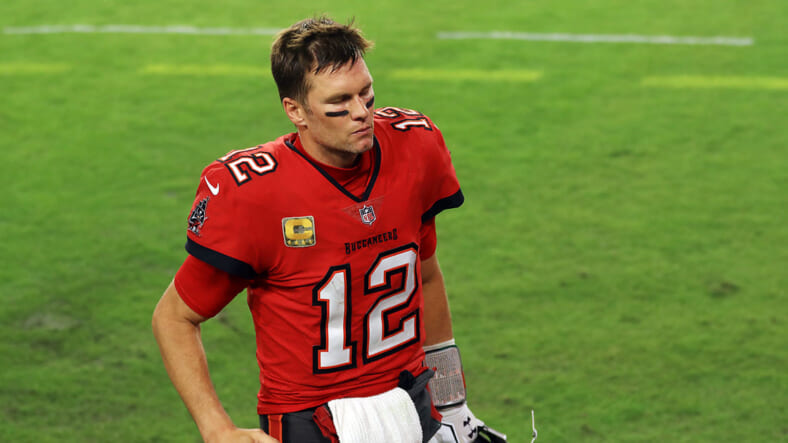 At 43—an age when plenty of NFL QBs are ready to retire and move on to big money in business or broadcasting—Tom Brady picked up after a full career with the New England Patriots and moved to Tampa Bay, where things are not going well.

Brady’s Buccaneers faced off against the New Orleans Saints Sunday and were crushed, 38-3. To add insult to injury, Brady threw one of the worst interceptions of his career, a last-minute toss so cleanly picked off by Saints defenders it looked more like the superstar quarterback meant to do it.

That was the last of three pickoffs Brady threw during the game—the first time he’s done that in nine years. To state the obvious (the Bucs only scored three points), he didn’t throw a single touchdown.

If you ever thought Brady haters based their dislike of the quarterback on his playing for New England, the level of mockery aimed his way during the Sunday Saints game made it clear: Some just want to rip on Tom Brady. This game and the last interception, in particular, set off a lot of jeering online—including from New England fans like sports journalist Gerry Callahan, who tweeted in part, “You just saw the worst throw of Tom Brady’s illustrious career.”

Show me a worse throw in Brady’s career .. not sure you can https://t.co/ke15B5vKqE

Well, there you go. You just saw the worst throw of Tom Brady's illustrious career. I blame his dirtbag bunkmate Antonio Brown

Tom Brady had a personal record-breaking game against the Saints!

• The 35 point differential makes it the worst loss of his career
• Was the first time he was swept by a divisional opponent in the regular season
• And his passer rating was 40.4 (third worst of his career)! pic.twitter.com/KQnfVDbEil

His opponents apparently celebrated and commentators had choice words as well.

"To say Tom Brady struggled, is a slap in the face to struggling. Tom Brady looked awful! Tom needs a lot of things, and you can't run the ball 4 times. You're asking for trouble asking a 43-year-old to throw the ball 35-40 times."

The Buccaneers are currently 6-3 for the season. They face the Carolina Panthers on November 15th, who stand at 3-6. It sounds like a chance to save face for Tom Brady, but anything could happen.

Defensive players are like sharks going after blood in the water when a quarterback is having trouble, so the Panthers likely have Brady in their crosshairs and are ready to put on the pressure.