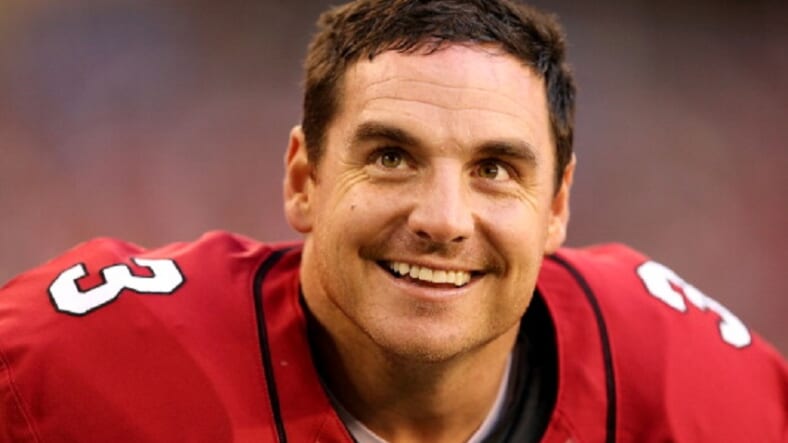 Wishing my beautiful daughter and her date a great time at prom #BadBoys pic.twitter.com/T5JRZQYq9e

A classic, silly dad joke got Jay Feely in some hot water Saturday. The former kicker for the Arizona Cardinals posted a photo on of himself on Twitter holding a gun, sandwiched between his daughter and her prom date.

He tweeted a friendly-sounding message, but the response he received online wasn’t friendly at all.

The tweet was plenty popular, with thousands of likes and retweets, but it also launched a social media pile-on—the kind of pile-on that could only happen these days.

Feely certainly had his defenders, but the critics were louder by a long shot. They accused the former pro kicker of behaving as if he owned his daughter and of insensitivity toward current gun control debates.

Jay Feely played in the NFL.

This is what repeated concussions will do to the adult brain. https://t.co/4rQlPmjANm

To everyone getting "offended" from the Jay Feely gun prom photo, this is a dumb dad joke that's been around for decades. It was even a meme years ago and a joke in 'Bad Boys 2.' Enough with your faux outrage and stop making everything into a stupid political debate… pic.twitter.com/YD8nGrJ1n7

A) Men really need to fucking stop threatening other people’s children with violence simply for spending an evening with their daughters B) Jay Feely is a fucking kicker https://t.co/k6m0jQR0Bo

Look guys,,,, Jay Feely was only using the second amendment to control who his daughter fucks or doesn't fuck

Brobible writer Paul Sacca’s tweet above is one of the best points made. This joke has been around for a pretty long time. Dads a little less famous than him have made goofy prom pics like this for years, sometimes pointing the gun straight at the unfortunate date.

Feely, however, was probably a victim of his celebrity. He issued an apology Sunday morning.

The prom picture I posted was obviously intended to be a joke. My Daughter has dated her boyfriend for over a year and they knew I was joking.
I take gun safety seriously (the gun was not loaded and had no clip in) and I did not intend to be insensitive to that important issue

Basically, Jay Feely was just being a lame dad, like thousands of dads everywhere. He likely had no idea of the shit storm that would come his way.

We live in a singular moment, though. A lot of people are getting hit with criticism no one would have faced even two years ago.

It’d be nice if people calmed down a bit. Probably won’t happen too soon.