President Trump has already tweeted his disapproval of the plan. 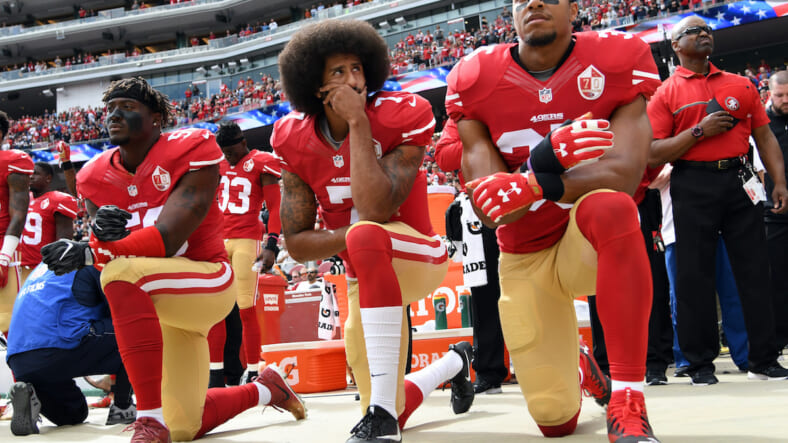 In a desperate bid to end the never-ending controversy around players kneeling for the national anthem, NFL owners may institute a rule change next season that keeps everyone off the field while the “Star Spangled Banner” plays.

“I think that if players are still kneeling at the end of the year, then it could very well happen,” a source told The Washington Post, which adds that it’s too early to tell if the change will be made. “I think most owners would support it, particularly if players continue to kneel this season,” the paper’s source said.

The move wouldn’t be as dramatic as it might seem. It was only in 2009 that NFL teams began leaving the locker room before the anthem and standing en masse on the sidelines. Prior to that, some teams would take the field to salute the flag during the anthem and it was customary to do so before the Super Bowl, but there was no rule mandating the practice.

At least one prominent football fan has weighed in on the potential solution to the league’s protest problem and he doesn’t like it. In a tweet Wednesday, President Trump called keeping teams off the field during the anthem “almost as bad as kneeling.”

If NFL owners thought they had stumbled on to a solution that would appease their biggest critic, they were clearly mistaken. Trump has made it clear that he wants players to be forced to stand for the anthem, but the league rejected such a rule change last month.

Instead, the owners are trying to work with the players on the concerns that led them to protest in the first place. To that end, the league has formally endorsed a crime bill that would reform sentencing for nonviolent drug defenders and is attempting to “lower the temperature,” rather than amp up hostilities by forcing players to stand.

As Jaguars owner Shahid Khan, who was one of the first owners to lock arms with his players earlier this season, told Deadspin, “We want them to stand because of their own free will because it’s the right thing to do, not because it’s been forced upon them.”