Sources close to the middleweight say the victim made the whole thing up. 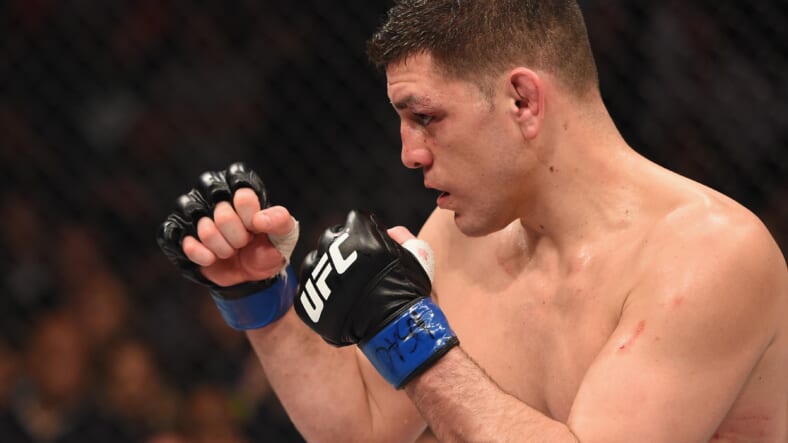 Nick Diaz may have gotten a little carried away with his “Stockton Slap.”

The UFC middleweight was arrested Friday on one felony and one misdemeanor count of domestic battery, according to jail records.

Diaz has been charged with felony domestic battery by strangulation, as well as misdemeanor domestic battery for the alleged incident. The felony charge could result in a prison term of up to five years if convicted.

Officer Larry Hadfield of the LVMPD office of public information told MMAjunkie that the alleged victim was female. Hadfield said officers responded to a call and were dispatched to a Las Vegas residence at approximately 7:20 p.m. PT.The person with knowledge of the case told MMAjunkie that 12 units were dispatched to the scene, the alleged victim was transported to a local hospital and Diaz was combative with officers during his arrest.

According to TMZ, the victim claims that Diaz was under the influence of cocaine when the assault occurred.

However, a friend close to Diaz refuted those allegations, writing in an Instagram post that the victim likely lied about the whole thing.

“Someone close and who’s with the accuser has also since told me she’s since really regretting having made this up and wants to come clean feeing bad but is now committed and will seem insane if she does back out,” wrote Matt Staudt Jr.

“You can’t hide crazy, especially not this kind.. The truth will come out.. there’s too much evidence and history out there,” he added.

“UFC is aware of the recent arrest of middleweight athlete, Nick Diaz. The organization does not tolerate domestic violence and requires all athletes to adhere to the UFC Fighter Conduct Policy,” read an official statement from the UFC.

“Every athlete is deserving of due process and this situation, as with any official allegations, will be duly reviewed and thoroughly investigated by an independent party.”

Diaz’s bail was initially set at $18,000. As of Saturday morning, he is no longer in custody.

The 34-year-old fighter is still under contract with the UFC but hasn’t competed in the Octagon since a 2015 bout with Anderson Silva at UFC 183. Both failed post-fight drug tests, and the fight was ruled “no contest.”