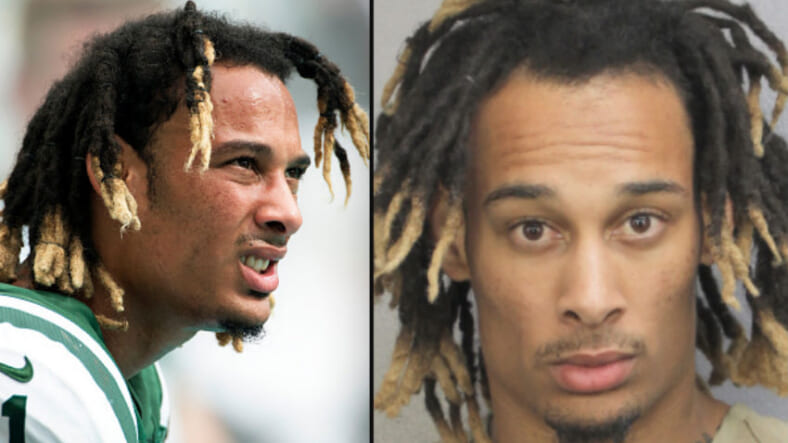 New York Jets wide receiver Robby Anderson had a great 2017 on the gridiron: 941 yards and 7 TDs. He had a crappy year off the field.

Anderson was popped at a concert in March of last year for charges including resisting arrest. TMZ Sports reports he was in cuffs again Friday morning in Sunrise, Florida, charged with speeding, reckless driving, and threatening to harm a “public servant or family.”

Anderson was allegedly clocked doing 105 in a 45 mph speed zone. That was just the beginning. Citing police reports, TMZ says the arresting officer felt threatened and alleged Anderson said “that when he got out he was going to find my wife, f*ck her and nut in her eye.”

The officer says Anderson was driving like a maniac — “all over the roadway and failed to maintain a single lane.”When the cop eventually got Anderson to pull over, Robby refused to cooperate — saying he wanted to speak with his lawyer right away and physically resisted when the cops tried to put him in the squad car.

Based on additional details, Anderson sounds like a dude really going through something. Or on something. He allegedly made more threats against the officer’s family, bragged about his wealth, and said the policeman was ruining his fun. His tweets from Friday night were also pretty weird.

Between his arrest in March and Friday night, Anderson is up against three felony charges, reports the Daily News.

The News also reports that the NFL has said it’s reviewing the case and Anderson could face a suspension.

The wide receiver sounds like a man on the edge, and players that volatile have been a blow to the NFL and their home teams in the past—the worst example being Aaron Hernandez.

Robby Anderson is already out of jail, reports TMZ. He likely went straight to his lawyers. He’s damn sure gonna need their services.