Odell Beckham Jr. Drives a Browns-Themed Rolls Royce With a Motorized Hood Ornament Of Himself

You’ve gotta see it to believe it. 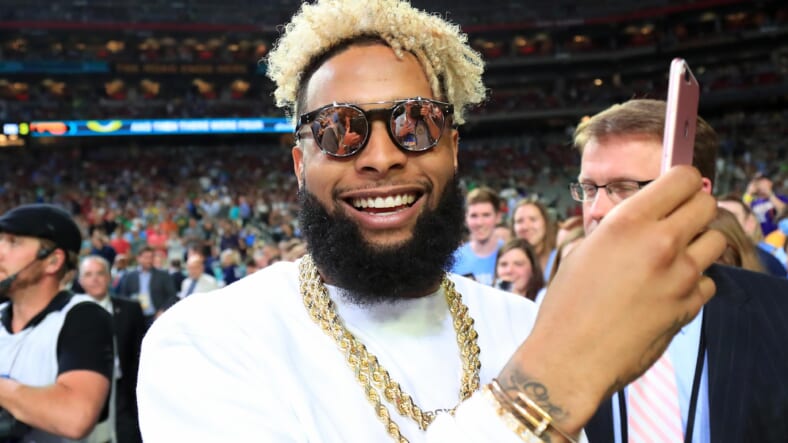 If you ever get enough money, live like Odell Beckham Jr. No, not the destroying your body in the NFL part, we’re suggesting using Beckham as a model for crazy-fun choices in bling.

Like, you know, a personalized, Cleveland Browns-themed Rolls Royce distinguished by an automated little hood ornament of number 13 himself, Odell Beckham Jr.

Freddie: "If you don't wear Brown and Orange, you don't matter."@obj: pic.twitter.com/7N68cuobsR

This isn’t just another multimillionaire athlete buying something kinda nuts just because he can. Beckham, you see, received almost $22 million from the New York Giants not long ago, and then they traded him to the Browns for some reason.

To make some kind of statement, apparently, Beckham bought this tricked-out, Browns-themed orange Rolls Royce Cullinan and swapped the usual hood ornament for an action figure of himself in a Browns uniform, number 13 emblazoned on his chest, making the one-handed catch that made him famous in 2014 when he was still with the Giants. Watch the ornament in action above.

This wild mod came from North Carolina’s Dreamworks Motorsports, a shop that specializes in modifications of everything, in their words, “from bulldozers to Bentleys.”

The Cullinan is $325,000 off the lot, so you can only imagine how much Beckham’s, uh, “improvements” cost—this one-of-a-kind car has to easily be worth up to a half-mil at this point.

Yahoo Sports notes that Beckham is probably helping keep the garage in business:

Beckham is a frequent customer at Dreamworks: The company’s webpage shows the custom Mercedes-Benz G550 he gifted to his mother, a matte black Ford F-250 he gifted to his father (that matches his own Mercedes CLS 63 AMG), and a Rolls Royce Wraith sedan.

It’s easy to joke about the crazy way so many pro football stars sometimes choose to spend their money, but let’s admit it: you’re getting paid to crash into other men at high speeds in all weather. Once you begin to acknowledge just how taxing pro football must be, you can’t blame Beckham for spending on himself and on loved ones like that.

But you know, this is not a guy who gives too many damns. Even if you did criticize him, it’s not like he’d care.

He could just switch on that motorized hood ornament with a grin, and it’s hard to argue with what a boss move that would be.