Was OBJ wearing a real Richard Mille superwatch or a fake one when he made that insane one-handed catch? 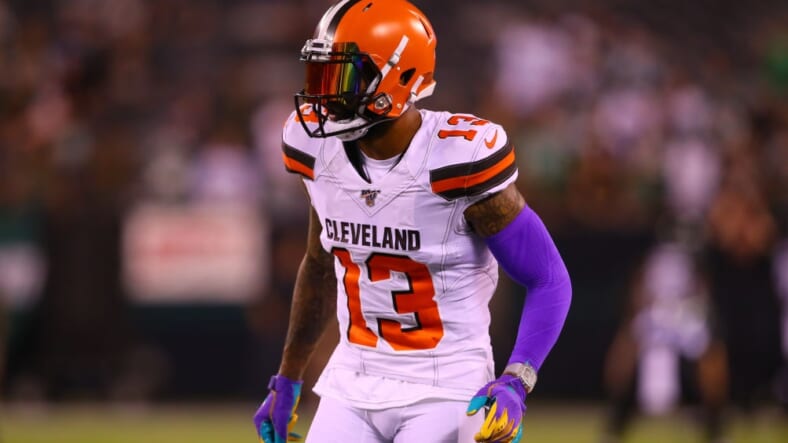 Odell Beckham Jr. took the field wearing a $350,000 Richard Mille watch in his Cleveland Browns debut, a 43-13 loss to the Tennessee Titans. That caused quite a stir, with the NFL voicing disapproval, citing a rule about not wearing a hard object on the field.

But OBJ did not care, and the proof was captured by cameras before and during the Monday Night Football game between the Browns and the New York Jets.

Press photographers spotted what appeared to be another gorgeous Richard Mille timepiece, the RM 56-02 Tourbillon Sapphire that goes for a cool $2 million—in part because only ten were ever made.

In a way, he even doubled down on his don’t give a damn attitude when he made this stunning one-handed catch.

JUST SOMETHING ABOUT THIS STADIUM @obj pic.twitter.com/e24DuCvKAs

As for the watch, maybe you noted we said “appeared.” According to the New York Post, Beckham wasn’t wearing a Mille at all:

London-based watch media site Watch Anish alleged Beckham’s warm-up piece was a cheap imitation.“@obj wears a FAKE Richard Mille RM56-01 Sapphire (except his is made of plastic) during the warm ups vs New York Jets last night,” the outlet posted to its Instagram, claiming in a story shared Tuesday the “material is plastic not sapphire” and the “case shape is wrong.”

There were plenty of doubters on Twitter as well.

OBJ rocking a fake Richard Mille tonight. Here’s what a real one looks like vs the plastic crap he’s got on. Smh. pic.twitter.com/68VPMBHB3v

@obj Called Out For Wearing A FAKE $2 Million Watch During ‘MNF’ By ‘The Luxury Watch King Of Instagram’ https://t.co/oy5XSOJIIS

While a lot of people jeered at Beckham’s watch being a fake, there’s a case to be made for him knowing it was and wearing it on purpose just to mess with people after the brouhaha over the real Mille from the Titans game.

After all, the only important thing is his ability to remain a one-man highlight reel with near superhuman one-handed receptions.

And he could buy another Mille—a real one—if he wanted to right now and probably wouldn’t even notice the hit on his bank account.