The Juice is loose once again. 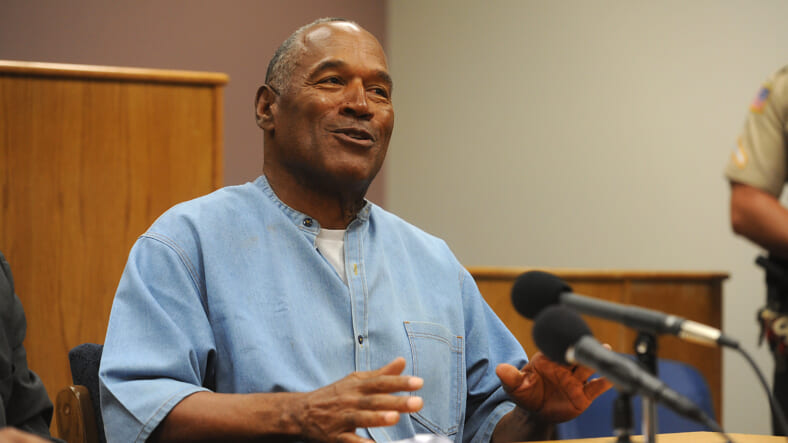 O.J. Simpson has been a free man for just over a month and the troubled tailback has already found himself in hot water.

Holed up in Las Vegas, Simpson has reportedly been spending a lot of time at casino bars, in addition to working on his golf game, as he makes up for the past nine years he endured behind bars.

Never know who you are going to see in Vegas…. yep, OJ Simpson pic.twitter.com/ginaBY6zwk

On Wednesday night, Simpson was kicked out of the Cosmopolitan Hotel after a drunken outburst in its Clique bar, TMZ reports.

Hotel staff tells TMZ … at around midnight last night, Simpson was drunk and became disruptive at the Clique bar. We’re told Simpson was angry at hotel staff and glasses broke at the bar.

Simpson was reportedly removed from the hotel by security and has been given a lifetime ban from the Cosmo and it’s swanky watering hole.

While the police were apparently called, and TMZ has a clip of the audio from that call, Simpson was not arrested. Still, there’s a chance the 70-year-old may have violated his parole on Wednesday night. While the terms do not forbid him from drinking, they do stipulate that he not drink to “excess.”

If he was in fact so drunk at the hotel bar that security had to kick him out, that might qualify. Of course, it’s too late now to test his blood alcohol content, which must be over .08 for him to violate his probation.

Of course, there’s a chance this all a big misunderstanding. At least, that’s the claim of Simpson’s lawyer, who says his client was neither drunk nor belligerent on Wednesday night. And as we all know, Simpson and his lawyers only ever tell the truth.