They even told the kid he was dying! 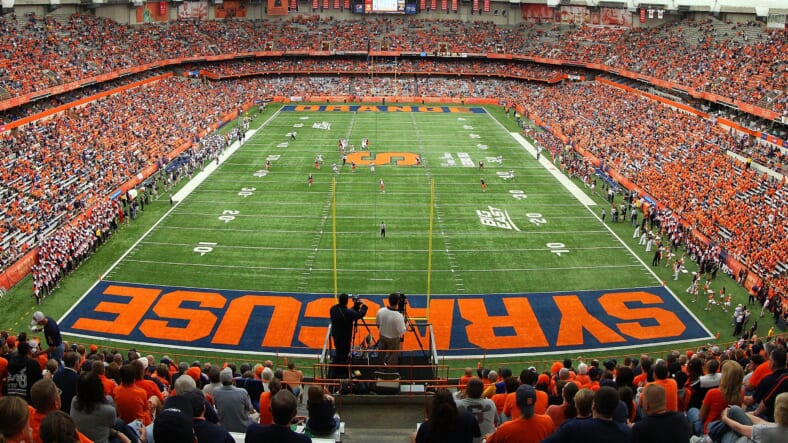 Every so often, sports fans are treated to a feel good story about a sick kid who gets the opportunity to hang with his heroes before he shoves off. These stories are a nice reprieve from the drama and negativity that so often engulfs sports news.

But not this time. Police in upstate New York have arrested two parents who pretended their kid had cancer so he could hang with Syracuse football players. And also so they could raise some money.

Martin and Jolene LaFrance were arrested after a tipster told police about their scheme, which involved telling people that their kid CJ had Hodgkin’s lymphoma. They then set up a GoFundme page and started raking in donations, fraudulently raising more than $3,000.

The fake illness landed little CJ a treat least year: The chance to attend a practice with Syracuse football.

Here’s how his illness was described in a Syracuse.com piece after he attended the practice:

It’s been a difficult year for CJ, who was diagnosed with Hogkin’s lymphoma in January and recently had his diagnosis upped to Stage 3 lymphoma. He’s already undergone a full round of radiation, is about a month into three-per-week chemotherapy sessions and has had multiple lymph nodes removed via surgery.

Unfortunately, doctors have not seen significant progress. And in recent weeks, they discovered a malignant tumor in CJ’s abdomen.

And we haven’t even gotten to the craziest part yet. The parents weren’t just going around town telling people their kid had cancer, they told him that too!

Cayuga County Sheriff’s Office detective Nicole Stewart tells Syracuse.com that the boy thought he had cancer and so did everyone else in the extended LaFrance family. That includes his uncle, who accompanied him to the Syracuse practice.

GoFundMe has begun refunding donations people made to the LaFrance family, who have been banned from the platform for life. We’re going to guess that’s the least of their worries right now though.