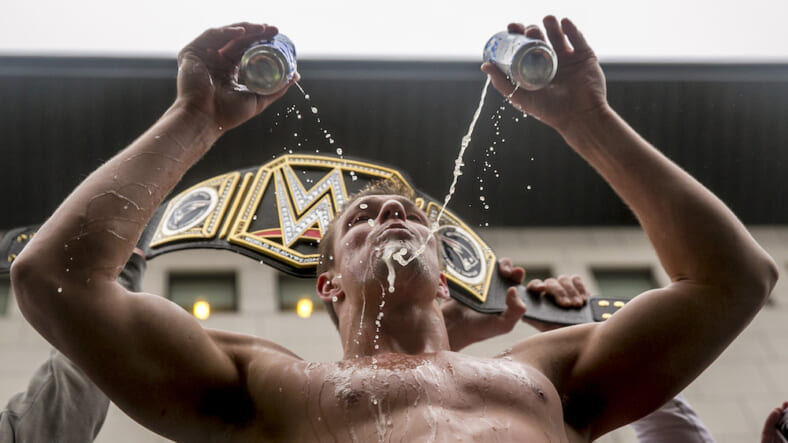 When the Patriots took to the streets of Boston on Wednesday to celebrate their Super Bowl win with tens of thousands of delirious fans, there was reason to believe that Rob Gronkowski would be partying hardest of all. Not just because he’s perpetually ready to get wasted, but because he didn’t play Sunday. He had more energy to get stupid, and he did not disappoint.

Among the many videos of Gronk acting like a freshman on his first spring break, are those of him catching, drinking and spiking a can of beer; leading fans in a hearty booing of Roger Goodell; and opening a another can of suds with his teeth, while shirtless.

Pats receiver Danny Amendola got in on the Goodell hate too, albeit in a slightly more subtle way than Gronk.

Even the notoriously dour Bill Belichick participated by leading a chant of “No days off! No days off!” Gotta appreciate the consistency.

Here's Bill Belichick starting a "No Days Off" chant to a bunch of people who just took a day off.https://t.co/StAOTiDK3E pic.twitter.com/XtmZ5FeiyI

As much fun as the players clearly had, these celebrations are for the fans, who celebrated in typical Masshole fashion, with fist fights, dick pics drawn in snow, and x-rated signage.

Live view of Copley square from the 21st floor above the #patriotsparade that's not an arrow on the top right #Patriots pic.twitter.com/sdfgMtjzfG

Her father must be so proud. pic.twitter.com/Jew4v8l7zw