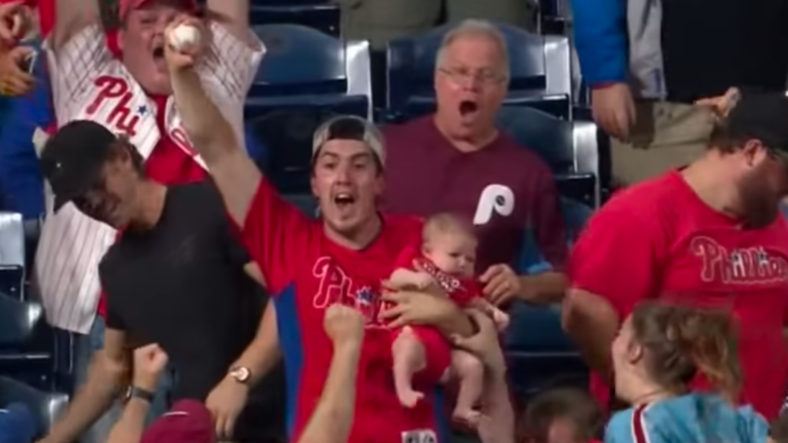 Baseballs cost around $2.50 on Amazon. A little ball of cork wrapped in yarn and covered in cowhide, they’re not exactly diamonds.

But the second a baseball has come of the bat of Major League Baseball player, it becomes infinitely more valuable than anything you can find on Amazon. If it’s a home run, rather than a foul ball, it’s even better.

That explains the great lengths people will go to get their hands on one of these little balls. And the dangers they’ll allow themselves and their loved ones to face.

On Monday night, we got another reminder of how much people love home run balls when a Phillies made a spectacular barehand grab while holding a baby that looks no more than right months old.

It’s natural to worry about the baby here, but there doesn’t seem to be any need to. Old leather hands here reached out and confidently backhanded that thing like he’d stepped off a Delorean from the 1870s, back before baseball players used gloves.

And if you look closely, you see there’s a women sitting next to him who’s supporting his arm as he goes up for the catch. Her man might be worried about bringing home a souvenir, but she’s making sure he doesn’t drop the kid.

Baseball fans have a long history of displaying their hero dad tendencies when it’s time to snag a foul ball.

Here are some other favorites.