Read on if you want to get jacked. 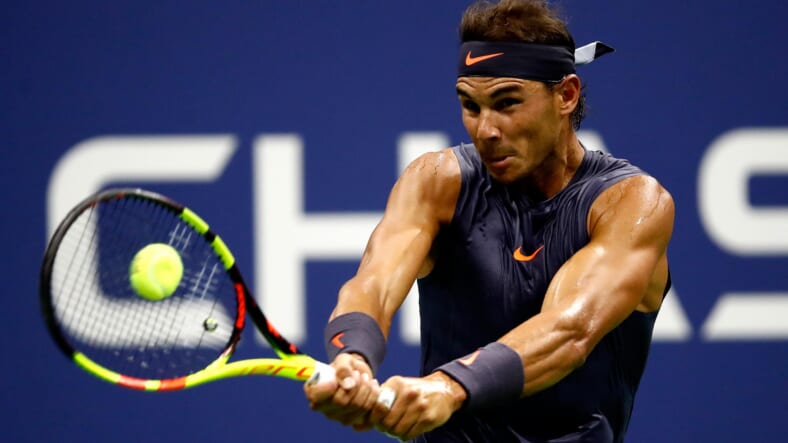 Rafael Nadal is not only one of the most decorated professional tennis players of all time —his 17 Grand Slam singles titles put him second only to Roger Federer—he’s also one of the most enviably ripped.

Anyone who’s seen his matches knows just how impressive it can be to watch the King of Clay’s bulging arms pummel that fluorescent yellow ball deep into an opponent’s court. Given how often Nadal wears muscle shirts, he probably knows it too.

Before Rafa takes on Argentina’s Juan Martin del Potro in their semifinal match of the 2018 U.S. Open, take a look at the diet that helps 32-year-old Spanish athlete maintain his chiseled physique.

Before Nadal beat Austria’s Dominic Thiem in the U.S. Open quarter-finals, he tweeted a photo of his pre-match breakfast: bread with olive oil, Iberian ham and juice.

The simple meal is an apparent diversion from Rafa’s normal meal plan. In 2016, he told Forbes during a Taste of Tennis media event that his game day fuel is “always seafood.”

He expanded in an interview at the same event with CNBC, saying that he stays away from heavy fare.

“It’s nothing very professional,” he said. “Fish is my favorite, grilled with olive oil. And I try to have some carbs, maybe pasta or rice. I try to eat nothing heavy before competition.”

Rafa keeps it simple on the court and hydrates with water or isotonic drinks, according to Business Insider. As you can see above, he’ll also scarf down a banana during breaks.

After a big win, Nadal indulges in a classic dinner true to his Spanish roots: his mother’s homemade paella.

“Only sometimes, not every day,” he told Forbes. “You eat paella every day, you cannot play tennis.”

When mom’s not around, Nadal is a perfectly capable of cooking his own fish fillets…

…and scouring the supermarket for healthy greens and red protein.

Shrimp and dumplings are another favorite meal of Nadal’s, according to a segment from Australian Open TV. As for guilty pleasures, you can probably guess what the Olive Oils from Spain-sponsored athlete snacks on.

“I love eating olives,” Nadal told CNBC. “They’re healthy but maybe not if you eat as much as me. And I like chocolate.”

If you’ve been paying attention, you’ve noticed that there’s been no mention of alcohol thus far. Don’t worry—the former Bacardi ambassador has been known to enjoy a cocktail from time to time.

But if you really want to get ripped like Rafa, keep the boozing to a minimum.